What is computation? What is counting? 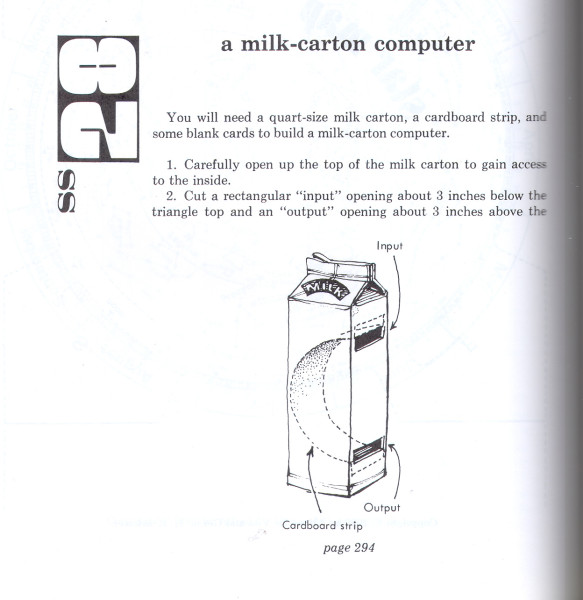 This is not a book about computers. It is a book about the developing relationship between human beings and computers. We humans have shaped computers, and now computers are shaping us and our environment. [p. 2]

To vast numbers of computer programmers and operators the computer is a large, powerful, and sometimes exasperating calculating machine. But it is actually and potentially muchy more than that

A modern computer is very simple and very complicated, simple because all it really does is add, subtract and compare, and complicated because all the tasks required of it must be reducible to these simple operations.

Computing began with counting, and counting began with the realization that 'one' is different from 'two' or 'many' and that there is an important similarity between, say, 'two cows' and 'two sheep' and an important difference between 'two cows' and 'three cows'. Once quantity is divorced from quality it becomes possible to play with symbols of quantity (numbers) and thereby to calculate. Numbers can be manipulated in ways that objects cannot. What is the square root of a cow? The question is meaningless, but the square root of a number is meaningful in our system of mathematics. [p. 5]

The modern computer is a 'black box'. The abacus user in contrast slides beads along wires at each stage of calculation and can see exactly what is going on. The history of computing is one of increasing delegation of control and increasing machine inscrutability. Every increase in automation has required a corresponding increase in man-machine communication. We have had to find ways of telling machines what to do, and when they have completed their obscure ballet, they have to tell us the result. They must interface with us at a practical level (we put something in, take something out) and at an intelligible level (they must make sense of what we put in, and we must understand what they put out).

Put at its simplest, a modern computer manipulates symbols by adding, subtracting and comparing them, and it does so via instructions known as a program. [p.7] The word computer was originally used (circa 1900's) to describe a person whose job it was to compute.

"Pickerings Harem" was a group of women computer's who translated astronomical data recorded on photographic films into tables of data in standardized units.

Digital refers to our fingers, in the sense of counting

Separation of Meaning from Representation

The concept of "one" is universal (in relation to two, or three)

We are used to writing and thinking of numbers using a system of Arabic numerals, a technology that originated in Persian mathematics in the 1st and 2nd century. In this system, 10 discrete symbols (0, 1, 2, 3, 4, 5, 6, 7, 8, 9) are used to express an infinite number of concepts of quantities.

An important step is to (re) make the separation between the notion of a particular quantity (say the number of days in the month of February, or twenty-eight) and the numeric notation of that concept ("28"). "28" is simply one way of expressing this concept. In Roman numerals, the same concept could be expresses as "XXVIII".

Binary, a system of expressing numbers using only two discrete symbols (typically: 1, and 0), is the system used by modern digital computers for simple numeric quantities. It was Claude Shannon who made the connection between George Boole's work on logical systems based on true and false values and using electronic circuits to implement them as circuitry. Using a binary system makes a physical implementation much simpler than a decimal system such as Charles Babbage's Difference Engine.

Instead of representing quality, another kind of "digital" representation exists in propositional logic based on "binary" notion of "True" and "False".

LET Y BE NOT X

Katherine is happy when the food is vegetarian and cheap.

The concepts (Veg, Cheap, Happy?) can be changed to represent anything, the operation of the and remains the same.

Gordon is happy when the good is vegetarian or cheap.

Gordon is happy when the good is vegetarian or cheap.

Who needs AND, you can replace it with NOT + OR

Katherine is happy if the food is vegetarian and cheap.

Katherine is not happy if the food isn't vegetarian or cheap.

Gordon is happy if the food is vegetarian or cheap.

Gordon is not happy if the food is not vegetarian and is not cheap. (He's only unhappy when it's neither vegetarian nor cheap).

Take a (digital) photograph which depicts counting in a public space.

Understanding binary allows how to count much higher than just four using the fingers of one hand. The word "bit" is a shortened form of "binary digit", and the word "digit" is another name for a finger. If we think of a raised finger as a binary "1" and a lowered finger as a "0", imagine how high you could count with four fingers (much higher than just four). In other words, how many unique signs can you make using the four fingers of one hand (where you only either raise or lower each finger, independent of the others). How would you teach someone to systematically work through all of the possibilities? The question "how high can you count using all 10 fingers" could be rephrased, how many unique discrete states can you form using your hands by raising and lowering each finger independently.

Danny Hillis The Pattern on the Stone