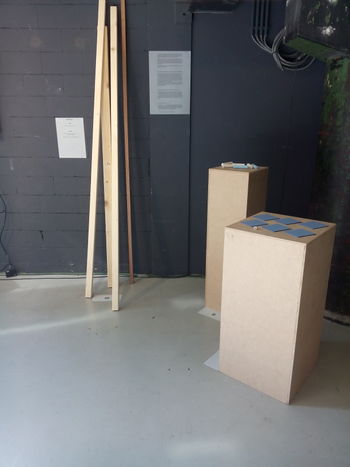 Cross-disciplinary media objects that share time and space, with subjects, in relational encounters. The encyclopaedia of movement in space proposes a series of constructed situations, a new stage for a lived experience of corporeality, in which the viewer, now the performer, acquires a different consciousness of the space we are in. “Whether they are islands of re-connection, experiments on mind-body stimulation or a spiritual search for essential motion, contemporary dance works express the concerns of our time: they question the value we give to existing in real space and time, and make us face or realize our desire to challenge the physical, social and psychological laws that govern us, and to actively enter the “dynamic reverie” (Bachelard, 1943, p.8) as dreamers of our perception.” For this exhibition I present three choreographic objects, part of the research for this trimester’s ‘Thematic Seminar’:

“John Cage and I became interested in the use of chance in the 50’s. I think one of the very primary things that happened then was the publication of the “I Ching,” the Chinese book of changes, from which you can cast your fortune: the hexagrams. Cage took it to work in his way of making compositions then; and he used the idea of 64—the number of the hexagrams —to say that you had 64, for example, sounds; then you could cast, by chance, to find which sound first appeared, cast again, to say which sound came second, cast again, so that it’s done by, in that sense, chance operations. Instead of finding out what you think should follow—say a particular sound—what did the I Ching suggest? Well, I took this also for dance. I was working on a title called, “Untitled Solo,” and I had made—using the chance operations—a series of movements written on scraps of paper for the legs and the arms, the head, all different. And it was done not to the music but with the music for Piano l, of Christian Wolff.” 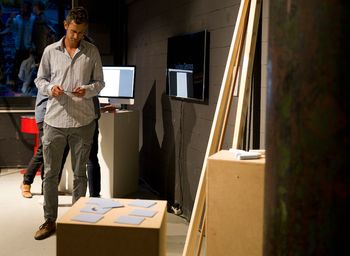 Bruce Nauman - Wall-Floor Positions, 1968, 60 min, b&w, sound. In this videotape Nauman assumes a set of positions in relation to a wall and floor similar to those he had executed for an untitled 1965 performance, which he described as “standing with my back to the wall for about forty-five seconds or a minute, leaning out from the wall, then bending at the waist, squatting, sitting, and finally lying down. There were seven different positions in relation to the wall and floor. Then I did the whole sequence again standing away from the wall, facing the wall, then facing left and right. There were twenty-eight positions and the whole presentation lasted an hour.” 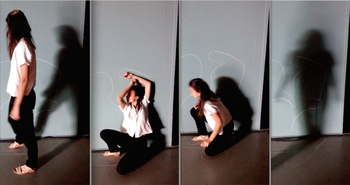 Trisha Brown - Sticks, 1973, 3-10 min. A 10-foot-long, 3⁄4” x 3⁄4” stick is placed with one end against the base of the wall and the other end on the dancer’s head. The dancer facing the wall moves forward maintaining the original angle of the stick until the head is wedged in between the stick and the floor. Performed by four dancers placed at equal distances along one wall or in partners – stick against stick – in the center of the gallery. 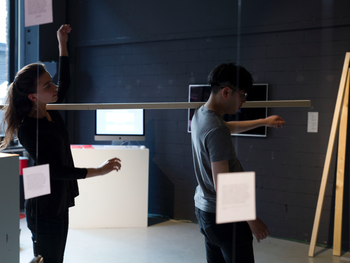 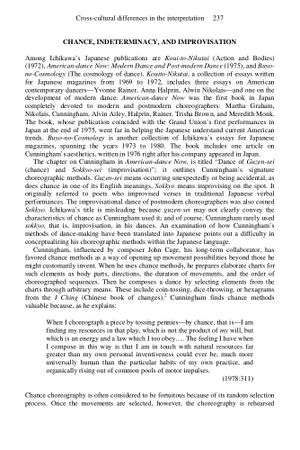 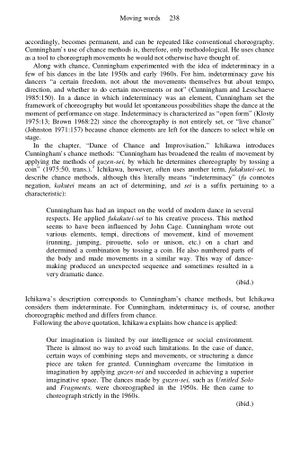 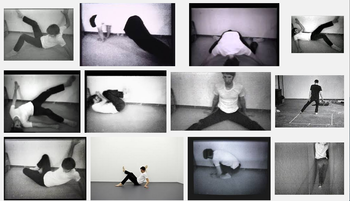 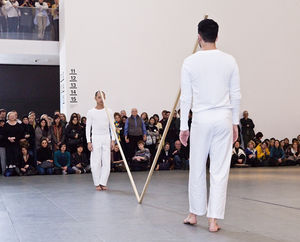