For a cosmology of wireless

Borders are symbols of protection and protection is an announce of death[1] A. Bonanno

On June 18th, 1815 Napoleon was defeated by the British in the battle of Waterloo. The same day, around Waterloo, there was very thick fog as well. Communication between Belgium and the UK was impossible that day: to communicate, they used optical telegraphers, a system invented by Claude Chappe in 1794. It consists of a series of signalers in elevated positions that acted as repeaters, allowing the signals to travel hundreds of kilometers. A smart artifact that unfortunately doesn't work when the weather is... completely foggy, like that day in that part of Europe. 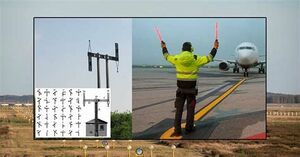 The Protocol of the optical telegrapher and its contemporary use

The key-character of this story is Nathan Rothschild, the person who basically was in control of the financial system of the UK. Actually, I have to correct myself: the key character is a carrier pigeon. Rothschild was in the possession of carrier-pigeons and they are faster than the optical telegrapher or any horse messenger. The pigeon brought him the news to London. Rothschild was the first to know (at least in London, 360km away from Waterloo) that the French were defeated, but in London he released the rumor of a fulminating French victory. This created a fall in share prices of the UK debt's bonds, because investors trusted Rothschild since he was always well-informed. But in this way, Rothschild misled the market by selling bonds and assets. Later he bought the shares back for dump prices. That pigeon, used as a p2p medium, can be thought of as knowledge's bearer and as power-maker.

That pigeon, in my personal constellation of fun facts, is the original sin that created two layers in the array of layers in Complexity.

In this thesis, I will focus on the second layer, the layer of the invisible, the layer of definable magic and of ineffable knowledge.

Media and medium are at the core of communication, every communication tool shapes in a different way the knowledge' flow and consequently the power' flow. Who got the best infrastructures has faster information and then more knowledge. Then the application of power has different faces, usually, it's forcing something (like the forced fall of the value of a country, as it happened in the UK thanks to Rothschild) or it's pervasive (like gps-tracking nowadays for capitalist purposes). Wireless media are covered, from my perception, with a kind of magic, full of dramaturgic cues: Firstly, for a human deficit, the impossibility to watch with sightseen the exchange of data through wireless generates an almost imputable aura of mystery and I think, paradoxically, trust. 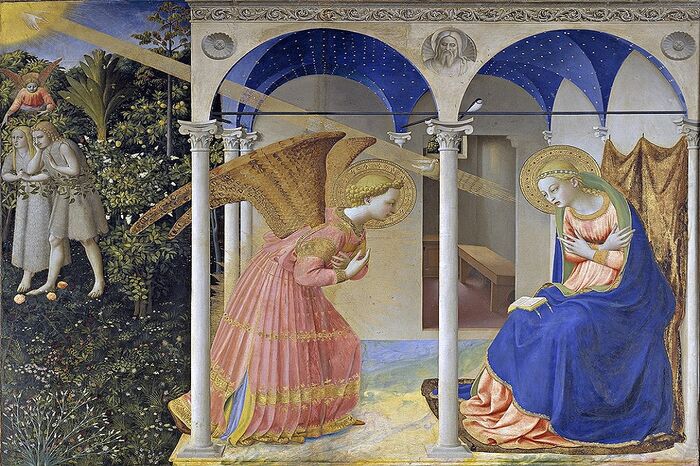 The annunciation of Beato Angelico shows the Arcangel Gabriel and the Madonna, but the sensationalist element is the ray from the sky. Data packages in form of the holy spirit (or vice versa)

These tools have the capacity to affect physical reality at a distance, and the link to a telepathy desire is strong. Using our devices as a natural extension of our body in the best cyber-tradition, from a communication point of view, this desire for telepathy is fully committed. It's not only the wifi, the cosmology of 'older' mediums such as x-rays and radio can really suggest how the wireless way to distribute knowledge (in a very broad sense) generates and shapes superstructures.

Smoke signals, drums, flags, homing pigeons... outline a cosmology of wireless starting to investigate from ancient systems artifacts of high-range communication is aimed to understand how and why we arrived here and now with the media we use every day. It would be a mix of technical, social, political + politics power analysis of wiereless infastructures (architecture) and its dwelling (urbanism).

I want to underline that the term Cosmology, in this text, wouldn't be considered as a branch of astronomy but as a branch of metaphysics that deals with the multitude perspective and nature of the universe (in this text, of the Earth and what floats around it (yes, satellite and other waves)).

I found a nice chart of "interrelations of different aspects of culture" and I think it's possible to consider cosmology as this aggregation of aspects. [2] 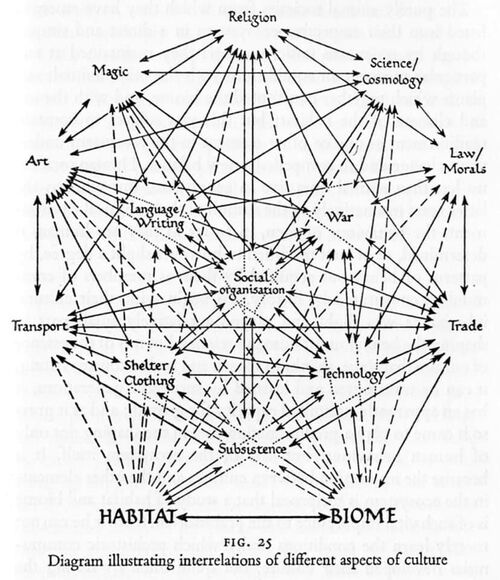 "You can never have too many arrows. #WorstAcademicDiagrams"

In this text, I would talk about ecosystems as "social organizations" (the central topic in the chart). Another key concept is the attempt to understand the wireless media as a multitude instead of a universal thing: that's why I will often talk the plural.

As I pointed out above, since I think the wireless has a magic aura I will focus on the left side keys of the chart: the magical narration applicable on wireless could be an alternative system of reality to Technic. While Technic attempts to capture the world through an absolute language, Magic centers its reconstruction of the world around the notion of the 'ineffable' that lies at the heart of existence.[3] I'm aware that the tools I'm going to analyse have a technic cosmogony but this is the crucial point: re-read and try to re-write the essence of those tools in a malleable and plural perspective: rethinking their protocols using the meaning of Magic as another interpretation tool.

Finally, I'm not really sure (not at all) about the direct line (in the chart) which connects in both sides Habitat and Biome, since Biome is a global understanding of Habitat: but it is something that I would talk about in the conclusion.

We are low-tech technophili, but not technopositivists. We would reassemble the world from the obsolete rubbish: we embrace raccoons-accelerationism.

From a personal interest in wireless to the fact that wireless nowadays is most pervasive, my proposal of world/future-building would start with a demystification of the "webmaster", intended as a generic person who commits changes in infrastructures who states a border between users and tools; in other words, a practical understand (know-how) for everybody. Furthermore, I think the classic DIY attitude must be changed in a DIWO (do it with others) attitude. Finally, I'm aware that those dynamics could be duable only in a community-scale; for example, a "can-tenna" can't communicate with space, and only big-investments from big countries can arrange a parabolic antenna to communicate with the ISS. At the moment, the pure meaning of "coexisting" is enough between a local scale to a global scale.

Unfortunately, I know that an 8000 words thesis cannot subvert the neo-liberal nightmare but at least can bring serenity in communities: when life and education will just match + the boundary between personal and collective knowledge will be unpractical to think, well... we will be ready to deal with the global, with the biome.

Introduction[500] I would like to introduce my thesis by talking about the fascination I have for wireless and then explain the intention and the writing method of the text: between anecdotes, historical facts, alchemic bullshits outline and define how the development of the different cosmologies (cosmogonies) happened and investigate what they caused.

Presentation of method[500] - EXPLAINATION OF THE PROTOCOL Analyse the stories with a cosmological and investigative attitutude, taking into account contemporary critiques to the historical and lingustic(idk if is correct) meaning of technic. The question to starts with is very technic-al, actually: what are the proprieties of the different wireless tools? What do they have in common and must have?

I would create a kind of handbook with different wireless tool/protocol/case studies and their cosmological analysis. They would be in chronological order and/or according to the signal range, from shortest to longest.

Having a table of tools with their protocols and implicancies would be the goal to imagine a new cosmological order.