Fage not Pound (FNP) was a temporary bar where visitors were invited to actively reflect upon the blurred boundary between leisure and productivity. Fage Not Pound was itself hosted by Page not Found (PNF)[1], an art book shop in Den Haag (The Netherlands). Fage not Pound opened on the 25th of March 2022 from 18:00 to 21:00 (UTC +1) but its existence lasted much longer in AccAcc (FNP's local time unit). Fage not Pound was imagined to host the official launch of This Box Found You For A Reason (Special Issue #17) a publication by XPUB1.

An Open letter to Ourselves

Prior to Special Issue 17 (SI17), XPUB1 already collaborated on the publication of Special Issue 16 (Special Issue 16 - Learning How to Walk While Catwalking) as part of their master at the Piet Zwart Institute (Rotterdam, The Netherlands). On March 2nd 2022, a few days after a work meeting about SI17, members of XPUB1 wrote a letter[2] to themselves as a reminder of their common goal: working together as a group and searching for a healthy and productive way of doing so.

"Team #1 will be in charge of what is to be found at the heart of the box. Conceptually as much as production-wise. They have to decide what kind of game(s) can be found by the user inside the box. It can be a crossing between games that have already been made this trimester in class, an evolution of them, a selection of them or even a whole new game. BUT, team #1 cannot ask any other groups to participate to the production of whole new items for the SI17’s game(s).
This game(s) can be only physical or physical&digital. Due to the nature of our assignment it cannot only be digital. Even if the game(s) is mainly digital, there needs to be a token(s) inside the box that can give the user some kind of physical agency on the game(s)."

"Team #2 will be in charge of creating the space of the box, conceptually as well as physically. They will challenge the physicality of the box within the context of gamification, exploiting its depth, 2D and 3D potential.


This team has to guarantee an element of surprise in relation to what is inside. They have the responsibility of triggering the customer’s wants of a SI17 depending of different physical features/triggers."

"Team #3 will be in charge of the overall Public Relationship & Experience of the SI17. They will curate the line of conduct leading to the purchase of the SI17 and what happens with it after it has already been purchased. They will decide the cost(s) of the publication.


The display of the publication(s) at the launch (what is the spatial set-up, public access, program, etc) and further selling points (example: do we always need a spatial setting for the SI17 to be sold or can they be scattered) is up to Team #3 as well.


All additional items outside of the box, made in the context of the launch or context of the SI17 are up to Team #3 to decide upon, conceptualise and produce (example: booklets, fake money, leaflets, posters, etc).

"The Visual Idenity representatives in Team #1 and Team #2 are responsible to communicate visual features applied to both the inside of the box and the outside, in order for the Loot Box to keep a coherent body. Team #3 can be informed of decisions being made through the representative to host that VI nicely during the launch."

"The treasurer is in charge of the finance of the SI17. They have to make sure the SI17's publication doesn't go over budget. Keep an overview of our spendings, that each aspect of the project has an equal or coherent budget distribution. The treasurer will also collect all the receipts, invoices and summarize the finance of the SI17 to the Admnistration of the school to guarantee all be paid back."

AccAcc (from Accumulate Accelerate) is a variable time unit synchronising the activities at Fage not Pound. The duration of an (1) AccAcc is directly influenced by the amount of visitor present in the space and gauged by a traffic counter at the entrance.


When the space is empty, the time unit is considered "dormant" and therefore called "AccAccDull". By default, an (1) AccAccDull equals one (1) second (the base unit of time in the International System of Units (SI)).


An AccAccDull becomes an AccAcc at the moment of its activation. The said activation happens when a person enters the space and is invited to press a button. Each time a visitor enters, the AccAcc's value is multiplied by 1,1. Thus, as the space gets crowded, the span of an AccAcc decreases exponentially, allowing time to pass faster. 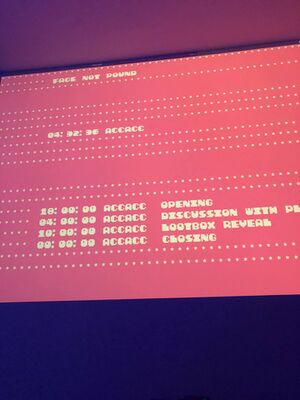 AccAcc projected on the wall at Fage Not Pound

Fage not Pound's program, expressed in AccAccs, is directly influenced by the amount of visitors, events are most likely to take place at the peak of attendance.

Fage Not Pound was a bar where the payment method is a bit different than what people are used to. At FNP, there was just ONE rule: 1 WORD = 1 DRINK. In order to get a drink from the counter, it was necessary to play a game: the Crossword. This is thought in order to delay the fulfilment of a need and slow the pace down, as well as invite for further reflection on the crosswords' topics.

At the beginning of the history of FNP, the Crossword Game emerged to reflect on delayed reward and slow-thinking, on productivity and gamification.

What people would say at the time was that this game made them feel part of something: they have been able to produce a collective work, a big crossword made by everyone in the room. It was a way to create interaction and criticise individuality and competition. Instead, this method invited us to embrace collectivity and inclusivity.

A typical game session at FNP would include a visitor coming to FNP to have a drink and a chat with some friends. They would enter the space and move closer to the bar counter. They would ask for a drink, maybe a beer, and pick a definition from one of the rings on the counter. Some of them would choose the topic they are more interested in, some of them the one they know better.

They would ask: "can you give me a hint?"; "I don't know the word, give me a letter!"; or run around looking for a friend to help them.

Finally, they would always find the solution at the clues. They would pick a marker, lie on the counter and slowly move it on the shiny and smooth surface, noticing the collective effort was finding its way on that table.

When the word is finally written, the visitor would get a nice cold drink in their hands and enjoy their time with some friends.

FNP was a safe space where to learn, reflect and spend some leisure time. People will miss it.

[Disclaimer: This crossword and its definitions are a combination of dictionary and encyclopaedic definitions and our own discussions as a group. As such, they are meant as an invitation for further reflection.] 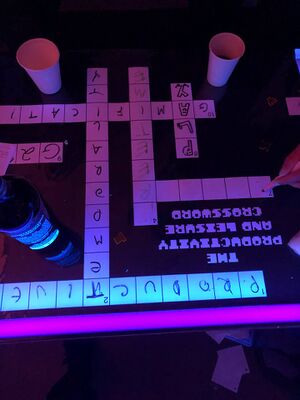 Launch of "This Box Found You For A Reason"

On the 25th of March 2022, Fage Not Pound hosted the launch of the Special Issue 17, a publication titled: "This Box Found You For A Reason". By subverting the medium of the lootbox, the publication was intended to let its audience familiarise with the theme of Productive Play 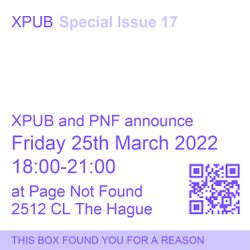 Navigation of the space

Fage not Pound's navigation was organised as a loop with separate, yet neighbouring, entrance and exit doors. To find their way, visitors were offered to follow a flowchart (on floor signage).

After passing the entrance door, the first occurring question was: "Do you have time?".

By answering "yes", the visitor was directed to the second question.

As a visitor with limited time, it was then possible to have a glimpse of "This Box Found You For A Reason" in a private booth located in the vestibule. The space was available for individual experience before the scheduled launch of the publication, after consultation, it was possible to purchase the item.
If time suddenly would allow the visitor, it was always possible to catch the long track after having experienced the short track.
Any publication sold before the official launch time would be sealed in an opaque bag.

By answering "yes", the visitor was directed to the bathrooms.

When visitors answered 'No', they were redirected to the main room to become players.
At the entrance of the room, players were instructed to press a button and choose an avatar in order to start the game.

Other section:
Players were invited to browse books on display on the topic of "Productive Play". read descriptions on the wall, hang out with other players, solve the crossword puzzles to get a drink, and participate in the talk by the Platform BK (Sepp Eckenhaussen and Koen Bartijn). After the talk, the big reveal followed. After the reveal, the inboxing of the first purchase of the publication streamed online.

Before reaching the door, one last question was asked to the player: "Do you want to exit?"

By answering "yes", the visitor was directed to the exit door.

By answering "yes", the visitor was invited to return to the main room.

You can purchase the publication, This Box Found You For A Reason at Page Not Found

"This Box Found You For A Reason"

Co-published by the Master Experimental Publishing (XPUB) at the Piet Zwart Institute, Willem de Kooning Academy and Page Not Found.

Under the guidance of artist Lídia Pereira and the XPUB staff, the master students of Experimental Publishing explored how (video) games features are making us more, not less, productive. Life and work are ‘gamified’ through social media, dating apps, and fitness apps designed to increase motivation and productivity. Gamification blurs the lines between play, leisure and labour, to release our collective dopamine for profit. Games in themselves often perform a reproductive role, presenting capitalism as a system of natural laws, exemplified by in-game predatory monetisation schemes. On the other hand, games provide necessary down time and relaxation, helping people function in a largely dysfunctional economy and society. Yet leisure remains a contested space which is still unequally distributed, between genders, ethnicities and abilities. The form of the publication reworks the figure of the loot box, a typically virtual and predatory monetization scheme. 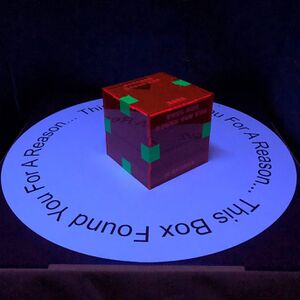 The display of the publication inside the private booth.

Pricing of the lootbox

To purchase the publication—This Box Found You For A Reason—interested visitors were encouraged to reflect on the economics of publishing and the difficulty to quantify artistic labour. To trigger this discussion, the costs related to production, distribution and tax were visible.

"At the attempt of quantifying our labour, we started to ask ourselves what is it that counts as work. Conceptualisation and production? Thinking under the shower? Opening a Telegram work chat while waiting at the café? Is learning another form of labour?" 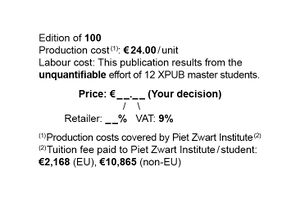 Price tag on the lootbox.