From Media Design: Networked & Lens-Based wiki
Jump to navigation Jump to search
Words for the Future - The Re-Publishing Project 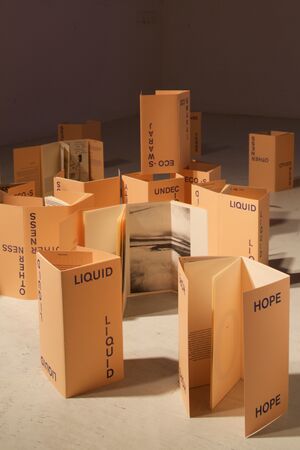 If we want to re-imagine our ways of being in and with the world, could we then start to describe it differently?

Words for the Future is a multi-voiced series of ten words that point to possible imaginations of various futures. Ten people from different parts of the world and from different fields of knowledge were asked to propose a word for the future. Each of them wrote a text that unfolds the desired or foreseen way of thinking or doing, this word defines for them. At the same time, an artists, in whose work this particular words seems already latently present, is invited to respond to it. Bringing both the essay and the artistic responds together in one publication, each issue becomes a dialogue around one word.

Words for the Future was initiated, curated and published by Nienke Scholts, self-published in co-production with Veem House for Performance, and designed and printed by Print The Future. Every issue is printed in a limted edition of 50 booklets. The issues where sold seperately and as full series at the Veem House bookstore, at Walter Koenig / Stedelijk Museum and with Books on the Move during European dance festivals and through their online catalogue. (There is still 9 full series and a different x amount of each seperate words in store.)

What does it mean to re-publish?

Looking into the etymologies of ‘-re’ and of ‘publishing’ is only one possible starting point to inform us on the question ‘what does it mean to re-publish something?’. For example: to understand re-publishing as ‘going back to the original place’. This could be for example understood as; looking again at the original departing point of Words for the Future, and to attend to the process of making the publications. OR, to explore how to somehow ‘undo’ the process of publishing by ‘doing it anew’. Furthermore, the translation from one technological context into another; from printed to digitial publication, and back, but also from one particular audience to another, and from copyright to open access, is going to influence our possible approach(es) to re-publishing. Ofcourse, the original material and content of the series, the words, essays and images themselves, are important entry points towards the ways in which they can be re-published. What is for example a LIQUID way of making something public again? How could the speculation on punctuationmarks by Michiel Vandevelde inspire our design or typographic choices? Following on these and other questions, within the ten weeks of the semester we are going to explore and develop a collaborative re-publishing practice. 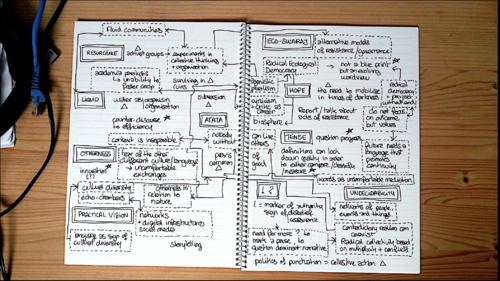 Map of relations, by Aymeric Mansoux

For the Words for the Future re-publishing project we'll work on:

Making it available to a wide range of audiences, sharable, downloadable, usable. How to translate from print to digital? From one technological space to another?

Words for the Future is automatically copyrighted even though / because it was not consciously given copy right or another license. In order to give it an easy accessible afterlife after its exclusive limited editions on print, we are making the content open access. In order to do so we are going to write a license that describes how the material can be re-used, treated and re-published by other readers/writers. The material of Words for the Future - i.e. the ten words / visions for the future - can guide us in the possible ethics, values, attitudes we'd want to include in the license.

2. re-publishing words for the future as map of relations - or ‘interstitial dramaturgy’

Making visible the web of resonance of visions / thoughts / worries / desires in between the different contributions and issues; the interstitial dramaturgy so to say. To map out this web of words for the future not as seperate thoughts but as a vocabulary / language of collective thinking and action.

The materials are uploaded to a repository in the XPUB git.

They can be cloned, downloaded as zip-file or viewed in the Gitea interface as individual files.

Morning: introduction to the project, going through the programme, how do we work

Annotation Words for the Future – pads

How do you design caring for a word?

Making 3 groups: every group takes care of 3 to 4 words

- you are responsible for these words throughout the semester.

Day: reading and annotating Words for the Future texts in different groups

How do you read?

What are your reading practices?

What could be different approaches?

Words for the Future is automatically copyrighted even though / because it was not consciously given copy right or another license; there is also no contract about this with the printers or co-publishers. In order to give it an easy accessible afterlife after its exclusive limited editions on print, we are making the content open access - all authors agreed with this. In order to make it open access we need to write a license for words for the future series. Instead of f.e. using a creative commons license, we get a workshop from Aymeric who knows all about the history of license writing for open source software.

What are the ethics of republishing / and of re-using?

What are responsibilities of republishing? (What does the author ‘allow’ versus what does the material invite?)

What sort of licence(s) do the words themselves propose?

Communicate to your peers:

- What is 'LIQUID' (title issue) / what is the text?, what are the visions of the authors, how are these expressed? (its a dialogue)

= convey to the other readers what the authors meant: ontological

- What are your own thoughts about this? your interpretation? And how would you step into the dialogue, add to the dialogue? hermeneutical

- What meaningful relations can be made between the issues? (And what do we consider 'meaningful'?) interstitial

make this discourse visible in the form of an A0 map.