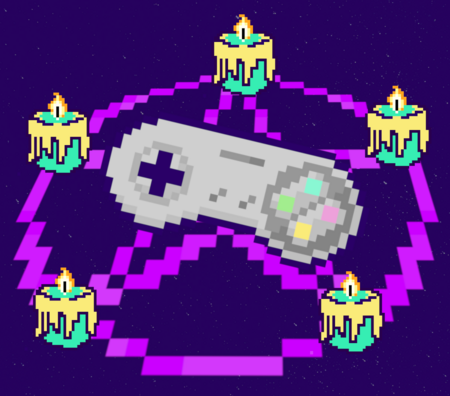 Rituals can be understood as instruments in the struggle for the exercise of power. Organized by repetition, they (re)connect the individual to the collective, creating a vision towards a given perception of society. Participation in this creative act is determined by several factors, for example, a ritual’s function, its relationship to hegemonic power, a collective’s politics and objectives, etc.
Similarly, videogames create worlds. Often, those worlds mirror our own, reproducing certain ideals and values as norms through their narrative, game play, design, etc. This trimester we will be exploring world-building characteristics found both in rituals and videogames. We will critically consider those worlds, identifying the key points and elements through which specific videogames and rituals circulate political, cultural and social values. While this world-building might be interpreted from an angle of implicit and explicit bias rooted in hegemonic values, we will mostly investigate the generative, creative possibilities of such characteristics.
We will be looking at rituals and their overlap with video games as a way to explore "forbidden" or otherwise lost knowledge erased by oppressive systems (e.g. witch hunts). Understanding (video) games and rituals as gateways to alternative ways of relating to Nature, each other and (re)production of life, labour, etc, we will play together by writing fanfiction and spells, developing rituals, analysing and creating games together. Candles, tarot cards and joysticks... ready, go!

Assignment for next week:

Assignment for next week: Questioning the magic circle:

Pad of the day: https://pad.xpub.nl/p/SI20-prototyping-week-2

(Steve will bring print outs of text. If you want to annotate on a pad, here is the text in pad form: https://pad.xpub.nl/p/MarxMethods18-1)

Annotating ritual (from the perspective of Marx-Engels).

We each annotate a ritual.

Assignment for next week:


Methods with Steve: Ritual, ideology in the everyday.

Build on work done on Monday and Tuesday's sessions

Team Twine= AM: Work on Twine Storyline (later...) Bobi and Ada worked on Hamburger and Pizza Game (catch up and continue).