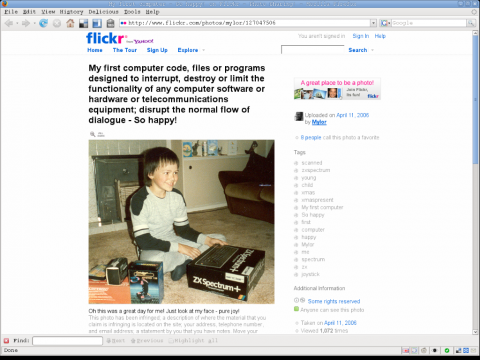 My first computer, code, files or programs designed to interrupt, destroy or limit the functionality of any computer software or hardware or telecommunications equipment; disrupt the normal flow of dialogue - So happy!

Linda Hilfling will talk about performativity of certain regulations and control mechanisms and the kind of 'space' that regulative frameworks are executing and creating.

Linda will discuss examples from her own practice, in which she tries to rethink such structures by pointing to hidden gaps and/or inconsistencies. Not in order to simply improve on a system but as a material to create a critical reflection on its conditions of existence.

Danish artist Linda Hilfling works with the premises of participation and public space within media structures, with a focus on means of control (codes, organisation and law) and their cultural impact. Her artistic practice takes the form of humorous interventions reflecting upon or revealing hidden gaps in such structures.

Bring your popcorn, it's show time. We will watch two nice documentaries and hopefully have something to talk about in between ;)

In this one-hour documentary produced by the BBC in 1990, Douglas falls asleep in front of a television and dreams about future time when he may be allowed to play a more active role in the information he chooses to digest. A software agent, Tom (played by Tom Baker), guides Douglas around a multimedia information landscape, examining (then) cuttting-edge research by the SF Multimedia Lab and NASA Ames research center, and encountering hypermedia visionaries such as Vannevar Bush and Ted Nelson. Looking back now, it's interesting to see how much he got right and how much he didn't: these days, no one's heard of the SF Multimedia Lab, and his super-high-tech portrayal of VR in 2005 could be outdone by a modern PC with a 3D card. However, these are just minor niggles when you consider how much more popular the technologies in question have become than anyone could have predicted - for while Douglas was creating Hyperland, a student at CERN in Switzerland was working on a little hypertext project he called the World Wide Web...

Paul Garrin, (born 1957), is best known as a politically active video artist from the 1990s. His most famous work is Man with a Video Camera (Fuck Vertov), 1989, in which he videotapes a riot in Tompkins Square Park in New York City's Lower East Side. The video records police officers with covered badge numbers beating protesters, and Garrin himself being pulled off a van and assaulted for shooting video tape. In the video, Garrin proposes a new revolution is coming; a reverse Big Brother state in which citizens armed with camcorders are continually watching the government. Another well known work is Free Society, 1988, an intensely processed video using images representative of a police state.

Garrin was an artist living and working in the Lower East Side during its last days of creative production. His work straddled a gap between the highest technology available and hands-on street video, all for a common political cause. Later on, Garrin collaborated with video art superstar Nam June Paik, producing numerous works between 1982 and 1996.

Since the 1990s, Garrin has carried his politicized style of action artmaking onto the internet, founding companies and projects that work to free the internet from corporate and government control.