project initiated by Andre Castro
performed by Cora Schmeiser ,
Toine Horvers & Jozef van Rossum
"Narratives of Deception narrates the dramas of the American soldier who captured Osama bin Laden; the daughter of Kenya's road minister who is threaten by her evil stepmother; and the sick and religious widow who writes from her hospital bed. All these are stories that circulate through the infamous Nigerian fraud spam emails, known as 419s. Narratives of Deception tries to communicate the richness of these authorless stories, and invite the audience to observe the intertwined network of texts, from which the 419 narratives emerge."
description by Andre

"Narratives of Deception" tells stories through spam emails in a form of performance where the language is essential. The text is collected, composed, re transformed and sample in poetic, rather abstract and intimate voice of the anonymous author. There are various authors, various interpretations, various layers of the same story (the personage of the soldier, the widow …the minister daughter ) The text has another meaning and value unfolding the richness and deepness of the so called 'latent literature'. In " Narratives of Deception " Andre Castro touches upon the very sensible string of the fake - folk tail - depicted narrative - theater and performance, spoken words and language.

The performance is group reading played by three in a form of table-read or read-through - a common theatrical form of pre rehearsal when the actors face up the screenplay for first time that the script has start living a life beyond the written words. However alter from the theatrical form where the position of the author / director and actors is fixed in "Narratives of deception" the performers have consciously participated/ collaborated in the formation of the text. Interested in who is the author of these texts I asked Andre.
Andre response:

"Well It is already quite hard to trace the authors of the original stories. In the sense they are author less. I want to make that clear. I am not creating anything from scratch. But trying to be an original work I rather see it as an unoriginal, uncreative work that actually its creative part or its labour is unpacking itself revealing these stories and taking them seriously. Which I think is often not done with spam emails and certain narratives which are taken as unserious and ineffective fraud. But rather as being ineffective fraud which they are they are pieces of literature and they should be treated and consider as such. I think in some way I am one of the authors of the performance. I am not the author of the text . But that does not conflict me. But it is an interesting debate. "

I made a video documentation on Andre's work " Narratives of deception". The short video is making off/ or process based which compiles/ archiive serious of rehearsals. The video consists of three parts: the intro ( extracts of the rehearsals or the second performed piece - "I"), encompassed with voice over of Andre's description of the project and working flow. The video ends with short interviews with the participant of the performance. It will serve as an add on/ supplement to the actual performance which took place in V2 on 25th of June part of the graduation show of Piet Zwart "News from Nowhere". It could be placed among the stills and the video of the performance on the website of the project.

PHOTOS from the last rehearsal 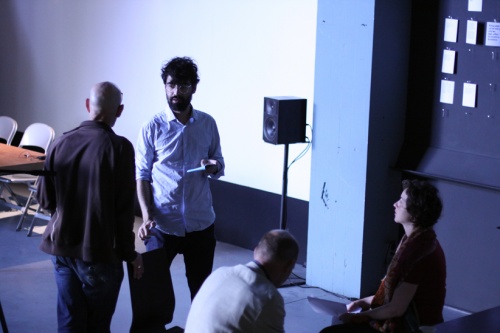 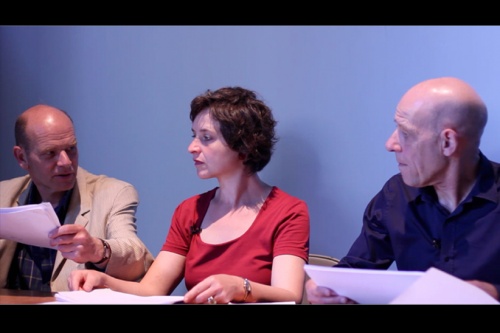 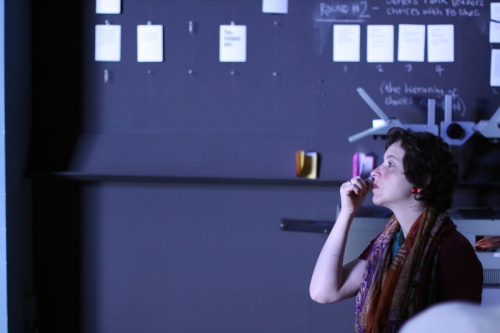 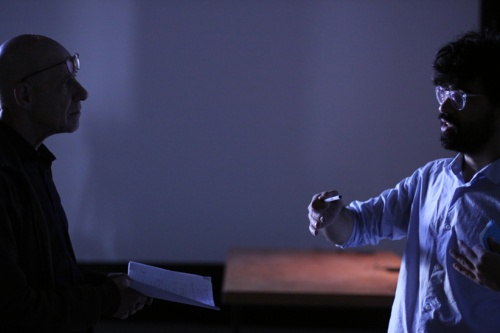 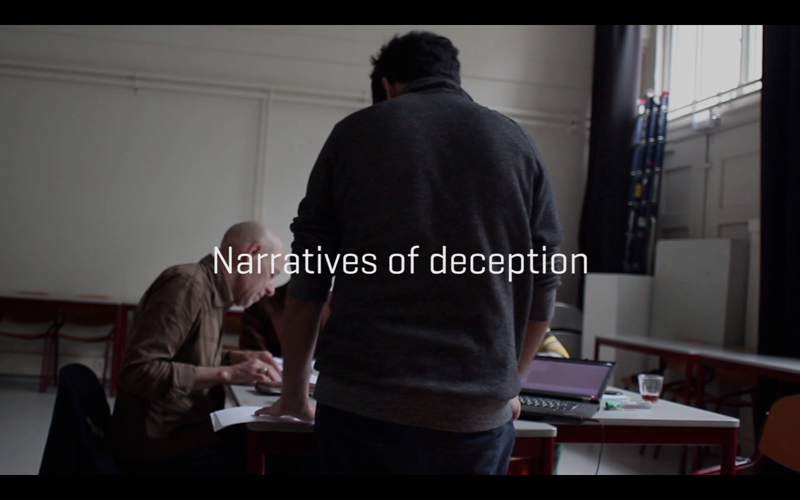