Annotation on Mapping the invisible visible

extract from the book "Open"
by Willem van Weelden


Maps are what prevent us from going in circle. In geographical terms maps allow us to orient ourselves in the space, resembling the territory. Moreover they allow us to move, act, transform and reform the territory. While in organizational terms maps imply orientation in social, economic and symbolic surroundings. In the time of mass disinformation or moreover manipulation in received information one easily could be misled or adrift from reality. (Reality as non-experience, reality formed on others’ observation or critical point of view, reality - existed and constantly fed up by the “media reality”) A guide or a map is needed more than ever.
Bureau d’etudes is Parisian conceptual group engaged in creating alternative structure of maps or “maps of visibility”. Maps aims to explore current contemporary political, economic and social structures. Proceeding from considerable amount of researches and studies the artistic duo has drawn visually detailed maps both geographical and organizational, based on wide investigation on the “organization of capitalism” (banks, corporations, stock-markets, labors, governments, etc.) An illustration of such a map could be seen in the map made of city of Dresden in 1995. Since the fall of the Berlin wall the city center has been re-transformed by vast growing German banks and numerous commercial signs.
The collective Léonore Bonaccini and Xavier Fourt seize to synthesize and visualize information, which often is invisible for the public the aim is to actualize, alarm the public. However can a map be precise enough to serve as an actual reflection on the current realities? Can a map be objective and fully interpreted without obtaining sufficient knowledge of reading the coordinates? Nonetheless considering the lack of statistics or strict analysis, the variety of viewpoints, the subjective matter of the medium or the hypercritical notion of the data itself etc.?
comment Useful link They rule[2]and more maps for better understanding of the topic--> 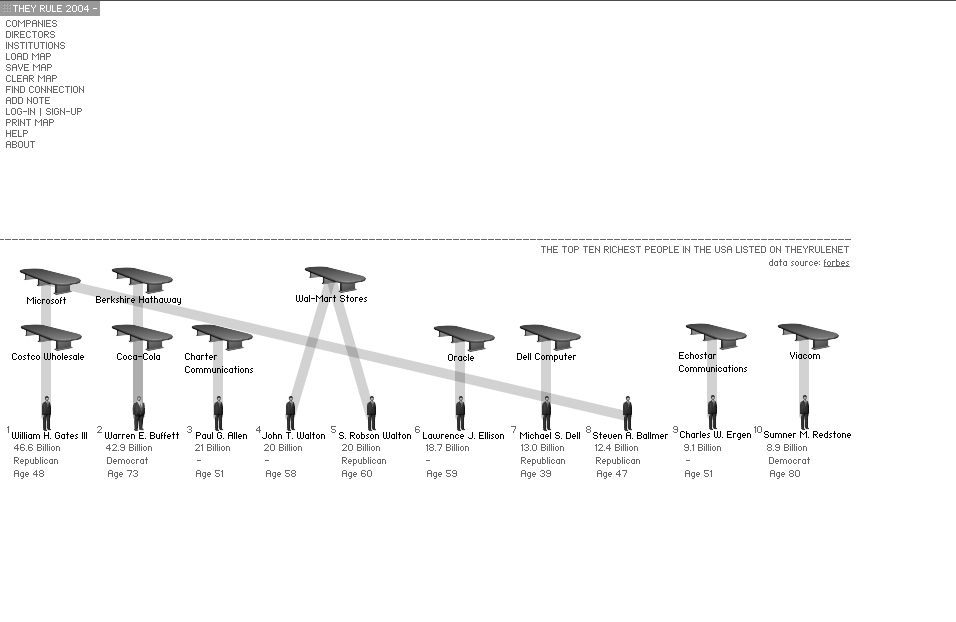