An encyclopedia of media objects

What is... an object? a medium? an encyclopedia?

Notes on the Piratepad

April 16th - Martin Heidegger, The Thing, 1935/1962, in: Fiona Candlin and Raiford Guins, The Object Reader, Routledge, 2009, 113-123 + assignment to each student to show how one of their chosen objects can be used to illuminate or criticize Heidegger's notion of thing

April 23rd: excursion to BAK Utrecht, meet at 11:00 at Rotterdam Central, meet at the subway entrance inside the main hall - Tristan Garcia, Form and Object - A Treatise on Things, Edinburgh University Press 2014 (Presses Universitaires de France 2010), p. 19-38: "No-Matter-What" & Bruno Latour, Where are the missing masses? The sociology of a few mundane artifacts, 1992 in: Object Reader, p. 229-254 + assignment to each student to present how Garcia's notion of things and Latour's notion of artifacts relate to their prototyped media objects 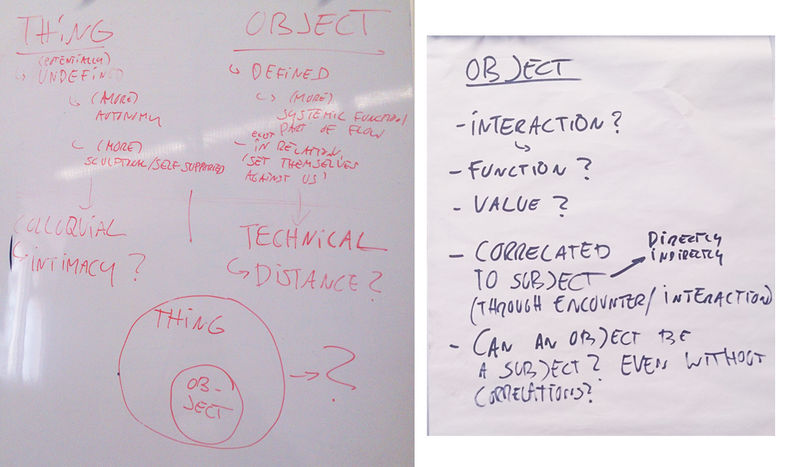 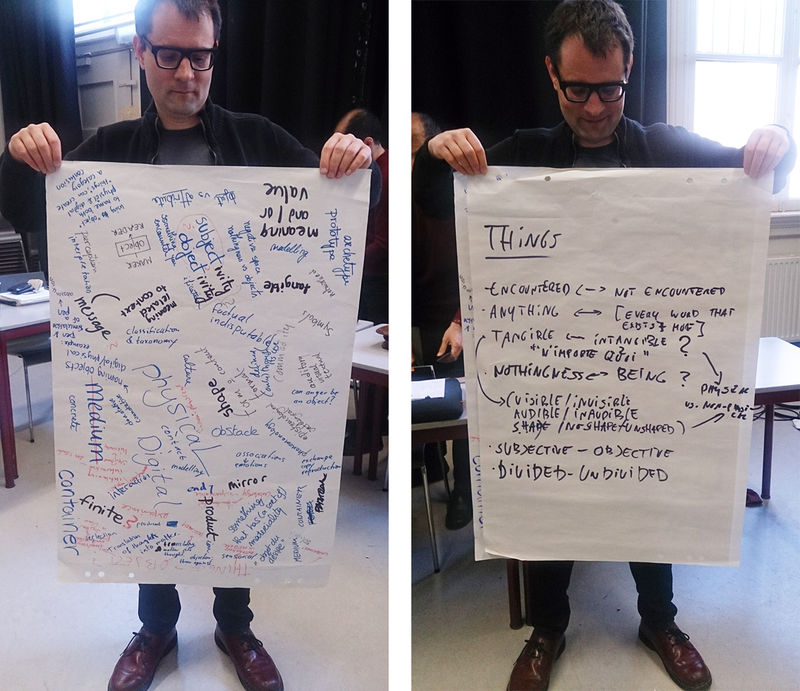 Part 2: what is an encyclopedia? May 28th - Marshall McLuhan, Counterblast, 1954 & Understanding Media, 1964, chapter 1: "The medium is the message" + voluntary assignment: Ernesto Fennolosa, The Chinese Written Character as a Medium for Poetry, 1920 + assignment to each student to relate their initial notion of "medium", as embodied in their prototypes, to McLuhan's notion of medium

June 11th Rosalind Krauss, A Voyage to the North Sea, Art in the Age of the Post-Medium Condition, 1999 + Félix Guattari, Towards a Post-Media Era (1988), in: Clemens Apprich, Josephine Berry Slater (eds.), Provocative Alloys: A Post-Media Anthology, Mute, 2013, p.26-27 + assignment to each student to relate their prototyped media objects to to the notions of the artistic medium, "post-medium" and "post-media"

June 18th: The last weeks will be dedicated to developing, in several teams, parts of an experimental Encyclopedia of Media Objects that will start with a definition of itself. This encyclopedia can take any form, and is born from a critical reflection of (a) what a medium is in general and (b) what its own media, objecthood and notion of encyclopedia will be in particular. At this point, the prototypes

Final week: June 22nd-June 27th: public presentation of the first edition of the encyclopedia of media objects at V2_, in a form/format that fits the concepts of enclycopedia, media and objects developed in the seminar.

SOL : Creating disappearance of an object/image, by showing my own categorization (like Borges) with existing, non- existing and fantasy animal illustrations. By showing it with a slide projector creates an zoology class in the old-days, you will not know what’s real or not. – Photo/installation work.

Arantxa: An object out of a non object: By researching the 'objects' wifi and selfies it becomes clear that in general people like to make something visual or tangible for themselves to understand it, these non objects are turned into things that create a reference to a known object.

Benjamin l: An encyclopedia of Stamps from the perspective of the collector edited by Benjamin l

Ruben: An Encyclopaedia of Expression/the Face - On the statistical/computational analysis of facial expressions

Manetta: An encyclopedia which follows the categorization of the annotated trainingset of the SUN database (of the Princeton University), which are used for machine learning. (link to SUN database) + wikipage

Allyson: Categories of animals with a function of carrier, machine, social symbol, etc. Including animals dead and living animals. shot with out environment, and dramatised with lighting.

Lucas: The proper name as an object in encyclopedia/authoritive books in art / art history / the artworld. The artist's proper name as object: an intervention in existing texts on art and its history (eg. Wikipedia) replacing and altering all proper names See more...