TP Adilkno The Media Archive - Assignment: short text of max 500 words. Name 2-3 topics in the text that attracted your attention.

Living in the Media

Media technology has shaped how human perceives the world. The free flow of information opens dialogue between cultures creating a new dimension of human interaction. As Adilkino states in this text "Earthly wiring and stratospheric irradiation have created an infrastructure in which anything can happen anywhere and anyone can be present at any moment." The internet of things promote exchanges of data beyond borders of geographic locations; a multicultural place with an universal language. Image + text + sound travel all over, connecting people in an euphoric media production! A creation of a new concept of global village - the cyberspace - seems to be the most natural ecosystem to inhabit. 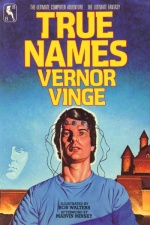 Cyberspace, a term first used in 1981 at True Names, a science fiction novella by Vernor Vinge, in which the characters from True Names connect their brain directly to the internet with electrodes, and fully immerse themselves into a virtual reality. (1)

According to oxford dictionary cyberspace is the notional environment in which communication over computer networks occurs. People emerge into this new world of limitless possibilities. High speed access to information; and further reproduction; and propagation. A wide world to explore and get lost in its all complexity. It is "Babel-like confusion", a never-ending labyrinth, in which people manage to articulate their online activities.

In actual physical spaces the distinction between work and personal spaces gets blurred due to media "delocalization" and "detemporalization" (2). "Media nomads" get advantage of maximum mobility, moving forward, whilst absolete media is left behind: "Leftover data will disappear through the hole in the ozone layer and dissolve into interstellar dark matter.".

The World after the Media

"Media became global and universal.(…) Every place is instantaneously represented everywhere via satellite and fiberglass; a global view is the only international perspective that remains. At the same time, every object has the capacity to become a medium." Just as God was once at the center of the universe, media omnipresence and perhaps worship, has taken its position.

Adilkino sees the future of media ecology with a finite duration. "Once centralized, all things tend towards their maximum scope, only to finally disappear altogether. Even the media soon reach their omega point where spirit and matter coincide and a void is created, to be filled up by a new spirit." As many other cycles, the media "big bang" - after its great expansion - will follow a "big crunch", begin contracting until it possibly disappears. 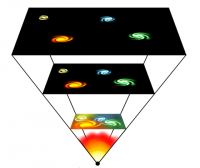 The Big Crunch. The vertical axis can be considered as either plus or minus time.

As is is exemplified with film and other media, developments keep succeeding one another: "All the anti-techniques invented by video artists lead to an inevitable acceleration of media self-destruction." Adilkino even suggest the possibility of an image-free society. Is it the future condition for the media?!

McLuhan claims that it is the media of the epoch that defines the essence of the society by presenting four epochs, inclusive of Tribal Era, Literate Era, Print Era and Electronic Era (3). What comes after the Electronic Era?! How far will go the relationship between VIRTUAL & REALITY ?

SOME EXTRA INFO ABOUT MEDIA & THE SPACE:

Providing the Fastest Way to Space

Made in Space’s Portal is the first 3D printer designed to operate in zero gravity. It is currently scheduled to launch to the International Space Station on September 19th, 2014 under a joint partnership between NASA MSFC and Made in Space. Contracted as the “3D Printing in Zero-G Experiment,” this first version of Portal will begin the era of off-world manufacturing.