The visual writing is the way of presenting your ideas through digital way instead of using analog way. The last forty years everything is being digitalized through new technologic systems such as Internet, television. News, the weather news, literature, art, books, scientific data and so on. There are huge digital kingdoms of libraries, which are online everyone can subscribe and read books that they like. It is kind of interesting maybe in ten years bookshelves will vanish and we will have a kindle books or something totally new, that bearer all books which exist, in the world.

According to the chapter Virtual writing of Adilkno's the media archive, the only way for books to survive, is digitalization and to renew itself through software investments. And interesting example of new design of Holy Bible from Adam Broomberg and Oliver Chanarin. This photo book is also visual writing, which uses verses of Holy Bible with images that they found it from open sources. 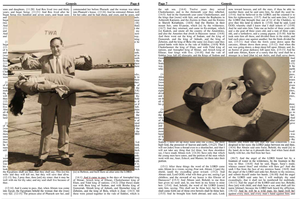 Before writing was invented human being had a stronger memory than now, according to scientists. However, there are sayings in Turkish language "söz uçar, yazı kalır" " talk disappears but writing remains" and "yazmak, tarihe not düşmektir" "writing means noting to history". Although Turkish culture is a predominant verbal culture, it is interesting that we have a lot of sayings more than these two.

Last decades people started to use mobile electronic devices more than ever. They are now part of our lifes and it changed our visual culture, even our gestures. Once I heard a story of a baby who just had first met with an Ipad before she started to look at books and magazines. The story goes that she was in a park with her mom, saw a bird. She tried to zoom in with her fingers like on an Ipad. This story reminded me Jean Baudrillard's Simulacra and Simulation theory. In his book he describes how reality turns to simulation through simularcs.

I have a series about the visualization of the present, where I made a text from Google images . I have searched the name of this series and then I used the images’ link that I found on Google, put them all to the text to create a new form of visual writing. When you click on the link you will see the images that contain these words.

" The ancient prophets were the television sets of their time, charged with a harsh definite and penetrating message. " Boeli van Leeuwen

What a sentence!!! I am not sure we can replace artists with prophets or the other way around, but I know that there is a relation between them (TV's, prophets, artists). They all want to share their messages. According to Artist's media, their source is the same; it comes from brain. When we realized the brain's cognitive functions and set foot in the timeless media matrix of the mind, we encountered the grids, which had inspired priests, poets and the founders of religious and empires. They always get a fresh input from this timeless area of our brain. In my opinion there is something missing on this theory. It is a quite positivist approach to the art. Doing art is not just a function of the brain-matrix. In the art there is also emotions beside mind that shapes human behavior.