John Cage started composing complex scores structured around factors of chance, or more accurately, controlled by chance, as early as 1951. Son to an inventor and a journalist, he spent his childhood in California more interested in reading music than playing it, and left college (because it was "of no use to a writer"(Kostelanetz, 2003)) for Europe. Traveling around France, Germany, and Spain, he settled in Majorca for a few months and started composing. (Nicholls, 2002) His first compositions were created using dense mathematical formulas, but Cage was displeased with the results and left the finished pieces behind when he returned to the United States. (Perloff, Junkerman, 1994)

In 1933, he sent some of his compositions to Henry Cowell, who encouraged him to move to New York to further his studies under Adolf Weiss, a former pupil of Arnold Schoenberg (Nicholls, 2002). After a few months of sleeping very little, working at the Brooklyn YWCA, and improving his compositions, he approached Schoenberg himself. When the older composer asked whether Cage would devote his life to music, Cage vowed that he would, upon which Schoenberg offered to tutor him free of charge. (Cage, 1961) Schoenberg's work, life-style and dedication to his work proved to be very influential to Cage's development. Although he never complimented his student's work, and often gave him a hard time, he's known to have praised him to an even higher degree:

In the late 30s, he started experimenting with unorthodox instruments, such as household items, metal sheets, and so on. This was inspired by Oskar Fischinger, who told Cage that "everything in the world has a spirit that can be released through its sound." Although Cage did not share the idea of spirits, these words inspired him to begin exploring the sounds produced by hitting various non-musical objects. (Kostelanetz, 2003) Over the next 50 years he'd come into touch with an array of strong characters who guided his direction, among whom Lou Harrison, László Moholy-Nagy, Max Ernst, Peggy Guggenheim, Piet Mondrian, André Breton, Jackson Pollock, Marcel Duchamp, Olivier Messiaen, Pierre Boulez, Morton Feldman, David Tudor, and many, many others. It was through his growing interest in, and compositions for, dance that he met Merce Cunningham, who became his lifelong partner and collaborator, both artistically and romantically. (Wikipedia)

I want to point out that this seemingly meandering life path is of course heavily reliant upon chance encounters. Rather than just letting these moments and people slip by, John Cage grabbed a hold of them, and often literally bent them to his will, to make them part of his journey and work. This is where his exposure to the I Ching (Book of Changes) comes into play - a classic Chinese text which describes a symbol system used to identify order in chance events. While Cage and many others credit the book for the incorporation of chance elements in all of his work after 1951, one can wonder whether it was Cage himself who willed chance into existence. Aiming to free the composition from the composer's will by creating work that's chance-controlled, he controlled chance. As in many of the other examples I've shown, he designed boundaries within which chance could enter the scene. 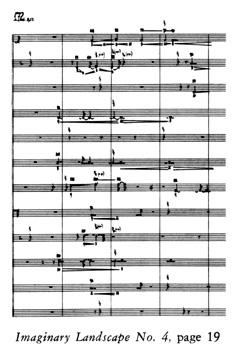 In Imaginary Landscape No. 4 (1951), a composition for 12 radios, 24 performers, and director, two performers each operate a radio whose kilocycle, amplitude, and timbre changes are notated. The score for the performance was conceived using the I Ching. According to Cage, this complex and time-consuming compositional process has the following goal:

"It is thus possible to make a musical composition the continuity of which is free of individual taste and memory (psychology) and also of the literature and traditions of the art. The sounds enter the time-space centered within themselves, unimpeded by the service to any abstraction, their 360 degrees of circumference free for an infinite play of interpenetration. Value judgments are not in the nature of this work as regards either composition, performance, or listening. The idea of relation being absent, anything may happen. A mistake is beside the point, for once anything happens it authentically is." (Medien Kunst Netz: John Cage, Silence, 1967, Cambridge Mass. P 59)