The Gait Analysis is the study of human motion. It is used to understand and quantify the locomotion pattern of a person, patterns that includes body movements and the mechanics of muscles activities. The last developments of surveillance technologies are showing an increasing interest in this identification technique. The characteristic of the gait, as a unique feature of an individual during ambulation, is becoming an affective object for surveillance biometrics techniques (tools based on metrics related to individual characteristics). Surveillance technologies are ubiquitous watchers of the movements of our public bodies and furthermore able to quantify, categorize, detect and track the characteristics of them. Described as a “non invasive biometric”, as it doesn’t require the cooperation with the subject and the system, this technique can literally “make use” of your personal body language that is observable through walking.

Power is becoming environmental and bodies are places of political and technological -as well cultural- debate.

Does this space includes opportunities of resilience?

What’s the role of human agency in its relationship with the political and social control systems?

POWER AND SUBJECTIVITY: THE CONCEPT OF BIO-POLITICS

“Discipline tries to rule a multiplicity of men to the extent that their multiplicity can and must be dissolved into individual bodies that can be kept under surveillance, trained, used, and, if need be, punished “ (Foucault, Society Must Be Defended)

Opening this text with the question of human agency vs control implies an automatic reference to Foucault and its concept of “Biopolitics” (or “Biopower”). The philosopher describes the political transformation of the 19th Century as a shift from an organization of sovereign power to a body-centered kind of power. Power is held over life and the biological comes under state control. Characteristic of the classical sovereign State was the right of ensuring life and death, or more precisely, the right to kill. The new complementary right of the new paradigms of power is the “power to make live and let die”* (Foucault- Society must be defended). Some of the techniques used by governments to do so are all centered on the individual body. These techniques are used to ensure “spatial distribution of bodies” and, using Foucault’s words, are methods of “separation, alignment, serialization and surveillance”. In short, these methods are techniques of taking control over bodies. I already analyzed in my previous text the relevance of the shift from the concept of disciplinary society (Foucault’s concept) to control society, underlined by Gilles Deleuze. What happens to be an important difference between these two models is that power is now applied as a non-disciplinary capacity on living beings. The new form of power it is further massifying population, it is so directed to man-as-species. Biopower’s mechanisms are directed to forecast populations, measure and estimate through statistic their behaviors and features; in this sense purpose of Bio-power is to intervene at the level of their generality. Biopower’s aim is to regulate the system by establish an equilibrium, an average, an “homeostasis” over life. Security systems in particular are tools to install over the randomness of a population an order or optimization state. “To regulate” means using overall mechanisms over individuals to achieve “overall states of equilibration or regularity”. Regulation of individuals is not taking the individual on the level of individuality, although is operating on a plane of immanence. Antonio Negri and Michael Hardt would describe this phenomena as a “set of equations and relationships that determines and combines variables and coefficients immediately and equally across various terrains without reference to fixed definitions of terms”. The technologies of regularizations, or control, are immanent to the social fields, and this is the most important differentiation to the disciplinary society. Command is now execute over the brains (through communication systems, and information networks) and bodies of citizens (through welfare systems, monitored activities, surveillance techniques etc.). Biopower regulates social lives from their inside, while becoming an integral function of individual life.

“Life has now become an object of power”

The society of control still uses disciplinary technologies, although they’ll applied and expanded on the whole structure of life: from the social patterns to the way individuals move.

Surveillance is one of the regulatory tools that the power structures uses over individuals. In order to ensure a valid identification of singular individuals in most of our cities are used the so called biometrics technologies. A biometric is a technique based on individual metrics. The features and behaviors of individual bodies are the object of those metrics. The body in biometric processes is at the same time the object and the subject of measurement: the body is being measured as the core of the identification process. Bitihaj Ajana in “Governing through biometrics” describes those technologies as neoliberal governmental strategies: “Biometrics is also a very telling example of the double strategy of biologisation and informatisation whereby the control and management of identity, movement, citizenship, access and so on are being conducted through the use and manipulation of one of our most intimate aspects: our bodies.” Our body is objectified by technologies of power: the subject becomes its object. The mechanic of surveillance is subject oriented and founded on sampling and categorizing techniques. To control subjects means finding footings among other identities: control is a relational practice that seeks similarities and peculiarities between different individuals. Identity is the point of reference from which information can be processed. As control efforts are taking place in defined social spaces (“public spaces” and/or spaces where social interactions happens) it seems like those technologies are being developed to imitate a fundamental human characteristic: the ability of “giving” an identity as attribute to another person. The technologies of control are homogenic instruments that effects us along existing social striations.

During the last two months, I developed a research on one form of biometric called gait analysis: the study of locomotive patterns as objects of individual identification. The way a person walk and move can now be used as metric of identification: the personal body language observable through walking is used as object of identification.

The research I’m showing in this text is developed in combination with the project of the second Special Issue “Pushing The Score”, in collaboration with De Player. For this publication we were asked to explore the concept of graphical notation for music scores, and experiments attempts of emancipating the term from its traditional meaning. In my project the tool of the score is used to instruct people to make a series of actions in a video and in the final sound composition part of the 2nd Special Issue. The first video I made was an experiment of gait recognition, performed by five girls in a photographic studio of an Italian design University. The introductory text from the video recited: “The video is a fictional instruction manual of an experiment of gait recognition. Imagining how this process works and how the identification through observation of walks can be used to invent new evasive forms of walk. By stealing the walk of another person do I become someone else?” The output of the video are a series of “adopted walks”: in observing characteristic from other people, and in assuming their peculiar movements could we -algorithmically speaking- become someone else? While walking differently, do I look like somebody else under the eye of a security camera? Even if the answer would be yes, there will always be a little problem: an algorithm cannot consist a truth if it cannot take in consideration the ambiguity, the difference, the dissent and the mutation of my body (and consequently cannot really define what’s human agency).

Could then alterity be a form of resilience to the realm of bio-technologies of power? 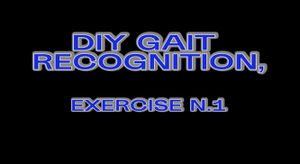 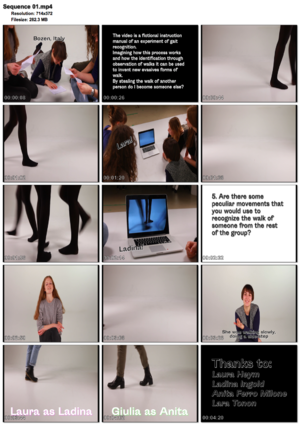 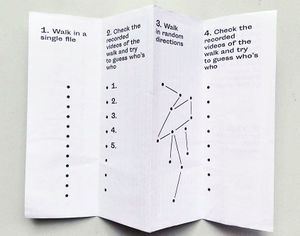 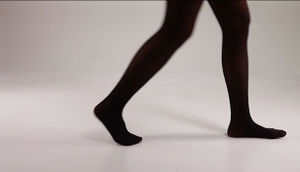 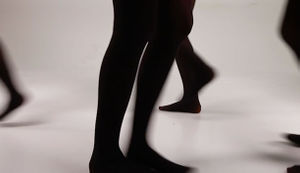