Performance art has become networked and no longer bound to physical time and space. Real-time technology and networked communication is reconfiguring the ontology of performance, the ephemeral live act can now be performed and experienced in multiple locations simultaneously.
Now that hyper-connectivity enables a shared presence between viewers and the performer becomes both here and there, the idea of the auratic object that Walter Benjamin claimed to be bound to physical presence has been reconfigured by its technological mediation
When referring to the aura of performance I locate it within tension of the unexpected, the improvised nature of the live moment that cannot be recreated.
Performance art has a long history of challenging the relationship between technology and the live aura and the discussion over reproduction and live art documentation has been fought since the 1960s.
We now find that Walter Benjamin’s argument needs to be revised, as artists are utlizing real-time technology and wireless networks to generate live performances with technology.
The medium can now operate within the live moment, processing and responding with the action so that the technology is no longer a reproduction detached from its authentic origin but a player in the act; generating the aura of the live moment in a relational mediation of events.
My enquiry for the graduation project is how does technology mediate performance and our experience of liveness?
I am interested in how networked performance art uses real-time technology to imitate immediacy and create a shared presence with audiences. In this configuration the technology becomes a live player in a networked act of performance where the unexpected, enigmatic aura becomes distributed through people and devices.


Content
The project in June 2015 will be a performance with real-time video projection(s) that will present the ideas of aura in networked performance and virtual reality.
A performer will be live streamed into the exhibition space and will be simultaneously acting in both a physical and virtual environment.
The live representation of the performer will disrupt the relation between the audience and the action to call into question the origin of the aura in live performance.
My own methods of performing via computers with a live audience will be applied to reveal the questions regarding immediacy and mediation.
By performing actions that are instantly mediated by computational processes, the direct affect of real-time technology on experience is revealed. The value of performance, in its ephemerality and originality can be revealed through its technological mediation.

Previous Work
http://vimeo.com/ 95677127
‘Foley Narrative’ 2014
Throughout my time at the Piet Zwart Institute I have developed a methodology for performing with computational data and a live audience.
In ‘Foley Narrative’ (2014) speech to text software ‘listens’ to the noise I create with objects and translates my actions into words that are projected on screen. The relations between the objects and myself are interpreted by the computer speech to text and program and generate an instant (mis)interpretation. I improvise with the direct mediation between the performance and the computer’s interpretation of my act. 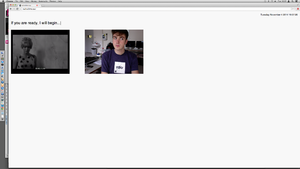