"how can improvisation be a "praxis of freedom" in conditions of unfreedom?". An improviser should "distinguish agency from selfhood, distinguish rational "hetero-autonomy" from freedom in the spontaneist/libertarian sense, materialise cognitive labour in such a way as to expose the comodification of immaterial labour" (Mattin, 2014)

Up until recently I would never have considered improvisation as a possible methodology for change. Through the works of artists like Mattin and Brandon LaBelle I have started to understand music and in turn improvisation as a practice that could help us understand and change some of the oppressive systems that we are subjected to. Because one of these systems would be an outdated and narrow system of value, I would not want to make a grandiose stand to suggest that I have any answers to any of the problems that we face. What I would then be suggesting is that we all of us are able to start from this humble position and develop ideas uninhibited by standardised methodologies. Again I would not want to make value judgments on all other systems of knowledge finding or sharing, rather to alleviate the negative connotations imposed upon improvisation, failure, and the over glorification of traditional mastery that is quantifiable.

A call to engagement by a much wider spread of "masters" as made by Isabelle Steggers is one I would like to promote in proposing a wider engagement of improvisation. To be able to start even talking about a wider application of improvisation I feel it necessary to see what improvisation provides me in my creative pursuits using music and software. So, my final project is just that, a distributed series of experiments that employ various systems to encourage improvisation, alongside a traditional context of improvisation that I plan to disrupt through the use of alternative interfaces. 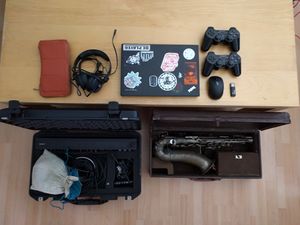 Karen Eliot is a multiple identity that was developed in a response to other multiple identity names being all male. This manifestation was brought to my attention by Florian Cramer when he introduced me to Lieutenant Murnau, a psuedonym of Italian neoist artist Vittore Baroni. I have chosen to use Karen Eliot as it is a disruption within a disruption that carries some satire. It allows me to create work collectively, abstaining from any ownership.

It is also in an effort to question the structures like the performance space, the "underground artist" or academia, not by creating something "new and disruptive" ever adding to the global gyre of resistance, but to recycle and reuse gestures that came before. As artistic practices have been appropriated by Neo-Libralist capitalism, we should not perpetuate this with creating "new paradigms".

So then, what is a performance and why am I doing one? If I am trying to resist standardised practices, and formal hierarchies of music and performance how am I to do that in the context of a performance where I, the musician are set upon a stage for all to see and revere for a mastery of a practice? If I were to engage in "negative improvisation" I would setup this typical structure to then not engage with it at all. This is all good and well, but it still presupposes the existence of it, and works in the realm of conceptual art in my opinion not sufficiently disrupting anything. The reverence of the artist then comes from a niche group of people that will perpetuate an exclusive mastery. So then, let us not simply break the standard, but augment it by inviting improvisers.

Multitude of outputs in an effort to dissolve the sole agent or work.

A more direct breakdown of lines between performer and spectator (not in a gimmicky way?) and the disruption of designated performance time and object. How in a traditional context can you subvert the objectivity of the performer and the performance. How can you expand a performance area and/or tool into non conventional space.

For me this can manifest as a performance with intentional distractions, that also influence me the performer. Rather than the audience being brought onto the stage as practiced by other "interactive" performance practices, I would like to drag their conscious attention away from me and to improvisational tools around the space. That way there is a distraction to me as performer, and them as interactor.

To suggest improvisational technique I would like to have a way to give the improviser/audience member a way to make their own disruption. I want to emphasise the fragility of improvisation, the responsibility of action and the possibility for alternative mastery leading to deeper engagements. Building on the idea that a listener is as much an improviser as the performance improviser I would like this to be disruptive to my control on stage.

For both me as a designated performer/improviser and to invite others' to improvise, requires some kind of interface. This then needs to be considered twofold as a "conventional" interface to alter parameters to affect something within the system, and as an object imbued with predispositions that can be engaged with. For my final project I have chosen a few objects that are traditional audio/music interfaces, and others that are not. The common thread throughout the project is that all of them are modified or built with custom code, and all of them are interacting primarily with music.

All code can be found here : https://git.suroh.tk/audioTools/ 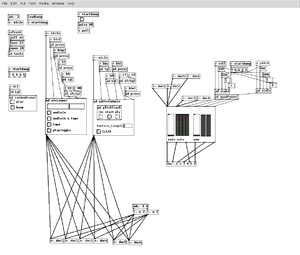 Setting up game controllers over bluetooth on linux : http://www.lakka.tv/doc/Wireless-Dualshock/

Need to look into why now the buttons don't register as analogue.