Cartographies of invisibility: A Collection of counter-cartographies amplifying misrepresented communities in Rotterdam 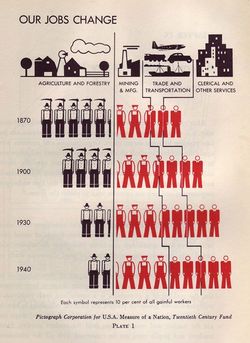 An Atlas that explore the potential of cartography and diagrams as a socio-political communication tool which can amplify the voice of communities and give visibility to their demands. Invisible information will be revealed about house speculation and gentrification phenomenon through hypothetical maps of the city of Rotterdam. I will visualise social claims and crisis situations using crowdsourced cartographies as communication elements to map resistance and claim for improvements.

Cartographies were understood during centuries as tools of power and domination, they use to define territory and draw its borders and resources. In 1995 Nancy Peluso introduced the term Counter-mapping referring to efforts to map "against dominant power structures, to further seemingly progressive goals”. Nowadays, digital communication and technology have a crucial role in the process of revert the power-based structure of mapping. This alternative approach to traditional cartographies allows to draw realities based on people voices and not in political interest.

When information is translated into graphic units, a series of protocols and rules are generated. Diagrams are based on codifications of language to produce visual elements (Drucker, 2014). I will explore these translation methods from isotypes to tech solutions for a global language. The goal is to render the information coming from people and communities in Rotterdam to counter-maps and diagrams. I will develop a collection of digital tools to process, select and represent this knowledge.

Collectivity and crowdsourcing are also key points of the elaboration of maps and diagrams with communities. I will explore the physical and digital possibilities of crowdsourcing and collaborative processes of map-making representing the wisdom of crowds and creating data sets based on people (social datasets).

I will look for vulnerable potential gentrified voices online (through petition platforms, online communities, twitter angry hashtags …) and offline (local communities, social collectives). These voices are usually lost in between an overwhelming amount of information. I’m going to extract these claims and to translate it into counter-maps, drawing a multilayer social cartography about the housing crisis in the city of Rotterdam. Then I will explore the role of online publishing of this information and the process of re-drawing and re-publishing maps.

Moreover, I’m going to explore paths to give this information back to society. This maps or visualisations can be transformed into effective tools for designers, architects and urban planners being able to materialise these claims. Diagrams are a cross-disciplinary tool, a hybrid design element which can play a decisive role in the evolution of cities.

In 2016, a referendum took place in The Netherlands asking citizens about Rotterdam housing vision. This referendum had 17% of participation so it was not considered as it did not reach the minimum 30%. Rotterdam citizens confessed that they didn’t participate because they didn’t know what they were voting for. This new housing vision implied a huge gentrification phenomenon in different areas. I hardly consider that this reality is misrepresented in the city and communities are silence about anti-gentrification claims. Therefore, new communication tools are needed to engage with citizens and represent their real feelings.

I believe in the necessity of amplifying the information that represents people and taking it as a base to built better societies. Cartographies and diagrams are powerful tools in order to visualise the real world. I map for a cause, I map in order to envision vulnerable situations, I also map because I want to stimulate collective action, I want people to feel represented and I want to transform these cartographies into useful elements for improving the city.

Images are produced and consumed in our current culture in quantities that would have been unthinkable in any previous period in human history (Drucker, 2014) so this is a crucial area to communicate with societies. If we add to this that a lot of the information we have on the internet, especially when it’s related with data sets, requires complex interpretation procedures, for me visual communication becomes a necessary tool to engage with modern human, who receives a large part of his knowledge through pictorial impressions ( Vossoughian, 2011).

Cartographies are tools between art, architecture, design, activism and technology. I position myself in the blurry area between these disciplines. This is why I consider cartographies, diagrams and maps are the optimal tools for me to communicate with people. This is not about automatic data visualisation but about emotional and affective cartographies that connect with people.

As a personal interest, I have always been fascinated with graphic novels that explore diverse visual storytelling challenging the traditional text-based layout of books and give the reader the freedom to scan and interpret a story. We need new visual strategies that allow us to explore alternative readings, as Jan Tschichold explained: “as a rule, we no longer read quietly line by line but glance quickly over the whole, and only if our interests are awakened, do the study in detail”. 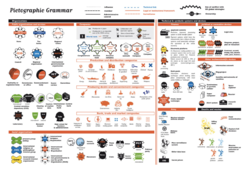 First, I plan to develop an inventory of digital tools to visualise information ("Toolbox for digital representation") that will make me conscious about the possibilities of representation with digital mechanisms. In parallel to this step, I'm going to collect existing information about house speculation in the city of Rotterdam and potential gentrified population. Moreover, I will look for communities to work with. These sets of information will be the starting point to draw the first hypothetical maps about this phenomenon.

Then, I will start a collaborative and dynamic stage, interacting with communities and modifying, complementing and building democratic data sets that represent people voices. I want to explore the existence of social claims online and offline and match it with convenient representation languages, producing a collection of counter-cartographies. This stage will also imply crowdsourcing mapping sessions (Mapathon) with locals, exploring the dynamics, protocols and languages using when developing a collaborative map.

Finally, the last step would be designing re-publishing strategies for maps and diagrams. I understand the project as an unfinished collection of radical cartographies that can be openly explored and use as a powerful design tool. I would explore the possibility for these maps to be published, spread and translated in different mediums and platforms in order to represent people and raise awareness about the housing crisis (Anti Eviction Map in San Francisco; Queering the Map - Lucas LaRochelle).

Steve/ Marloes - Global language.
Michael - How to collect and process data - Building data sets and manage sets of information.
André - Translation of data into graphic elements? -Collection of tools to visualise information.
I would also like to contact with some external people that are working in the Netherlands or abroad to talk about their experience with counter-mapping and diagraming ( Lize Mogel, Patricio Dávila, André Mesquita).
About house speculation, gentrification: (Working in these connections now) Poortgebouw community, N.A.C, Stad in de Maak, UrbanA collective, Daan den Houter, Melle Smets, Datactive Collective, Alexandre Furtado Melville. 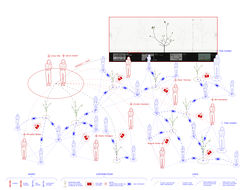 During my practice and formation as an architect, I have drawn diagrams for myself to help me think and to help me communicate with others. I have always tried to turn these drawings into generative elements for architecture and urban design. Furthermore, during my professional practice, I have been working in different urban projects dealing with gentrification phenomenon in Mexico and Spain. I have been working on these projects hand in hand with communities using collaborative sessions to develop maps that could generate new urban models.

Looking at the projects of last year, The Network we (de)served was a space for me to research about crowdsourced practices to map networks and how it can be represented through diagrams. With this project, I started to engage with collaborative online processes and the concept of “wisdom of crowds”. I understood the additional value of multi-sourced creations and co-productions.

The project The Library is Open and more specifically the workshop Marginal Conversations revealed a huge interest on me in amplifying, in this case, a text with participative activities. The workshop format is a space to enrich a source with inputs from diverse perspectives. We were also working in this project in the visual coding that people use when they were annotating and how to understand these visual traces. With the project Entreprecariat, I also worked with the concept of the power of capitalism and structures of power that is precisely the starting point of this research when cartographies are understood as instruments for domination.

Last year data became the most valuable asset on Earth surpassing oil. There is a vital process in how to understand sets of information, transform it and make them useful, emotional and sensitive documents. Links between knowledge and visuality not only have historic roots, but they also have anthropological and cultural dimensions.

Today we are surrounded by information, there is much more information that we can process in our life. I believe in the collection, selection and transformation of this information into a visual element that engages with society. This is the result of hard work between the artistic practice, the design and the technologic tools that we can use to generate graphic documents. Understanding complex phenomenon requires interpretation and analysis. Visual language is a powerful tool to facilitate this reading and to connect people through global language.