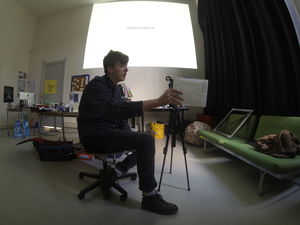 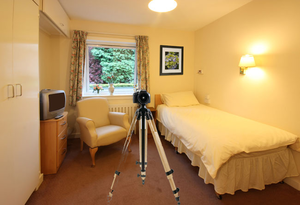 A 30 minute performance between one man and a camera.

synopsis
A piece of theatre demonstrating how computer software is altering the perception of our visual environment. A performance using a camera to explore the implications of computer vision. Using a live camera feed and photographs, computer vision software will interpret images with text that will be spoken within the dialogue of the performance. The performer will use the photographs to document the history of the lens and how computer vision is altering perception. The relationship between myself and the camera will be similar to a relative visiting an elderly person in an old people's home, interacting with it through the photographs and talking about its interpretations as if they are memories.

Installation / set
The camera is on a tripod in the middle of a room, a room that could look like an elderly care home with floral wall paper , a single bed against the wall, a window and a table with a vase. A room to die in.  There is a big camera on a tripod on its own looking towards the audience. On the back wall is where the projector screens words that are interpreted from the camera. The installation the camera sits static with the words changing on the wall depending on what the lens of the camera ‘sees’.

I would like to perform this as part of the event in V2 but also if possible install in the larger exhibition. The installation, when left on will project words on the wall depending on the viewers movement within the frame of the camera.

The performance
A man comes in holding some flowers he looks like a relative, he sits with the camera but gets no response he tries to engage with the camera but gets no response.  Eventually the man retracts like someone at a hospital bed visiting someone who is terminally ill or in a comber. He stands up and puts flowers in the vase and lays on them on the table.  He wonders the room, looking for distractions. He is trying to find some way to communicate with the camera. He picks up an old photo-book. In this scrapbook he begins to go through photographs with the camera that document and record the camera’s history. From early primitive photography to the current digital image. The man shows the camera photographs by putting them directly infront of the lens. Each photograph is interpreted by the camera using an auto tagging annotation tool from “Imagga”. Each photograph returns roughly 30 words that depict each image. These words are projected on the wall behind both the man and the camera. The words become the script of the performance which i improvise around, as if they are the memories of the camera. The man goes through the photo-book with the camera, reminding the camera of its history. Jogging the history of the camera through the framework of a persons life. The personality of the image analysis will become clear as it sees things in its own way. The memories are of the camera ‘s history which is being reinterpreted with computer vision software. We go through the memories of the camera, the images become a data object with key-terms that show camera transcend from a device made for human perception to automated analysis.

The context
I am interested in presenting in this performance the relationship between humans and machines in the creation of artificial intelligence.  Computer vision and automatic image tagging is processing images so that they become a circulated unit of information, a data object. The algorithms at play are often very reductive, biased and off the mark to how a human understands the image. They demonstrate the agenda for categorising imagery and perception to units of value that can circulate in the economy.  By setting this performance in a care home I am want to perform the ‘training’ that exists in human development of artificial intelligence. To turn the teaching that happens into a caring, sentimental supportive relationship. But also to create a contradiction between the two characters , a tension about how the camera now perceives the world and how the human describes it. This will highlight the stark contracts that are being made visible with the perception of artificial intelligence. The photographs. The idea that our visual environment could be subject to this reduction.


The Production plan
From March onwards i will be sourcing images to use in the performance. As part of my research into computer vision i have some works that i would like to develop in the run up to the final exhibition that id like to be considered as part of the assessment.


http://vimeo.com/ 95677127
‘Foley Narrative’ 2014 Throughout my time at the Piet Zwart Institute I have developed a methodology for performing with computational data and a live audience.
In ‘Foley Narrative’ (2014) speech to text software ‘listens’ to the noise I create with objects and translates my actions into words that are projected on screen. The relations between the objects and myself are interpreted by the computer speech to text and program and generate an instant (mis)interpretation. I improvise with the direct mediation between the performance and the computer’s interpretation of my act. I want to continue to improvise with the real-time feedback of computer programs. For me it creates an authentic experience from a tool that is programmed to operate in scripts and not improvise. I want to bring this approach to the webcams, how can I perform the computational mediation of these live events?