Title
When the Technology Performs

Project
The basis of my graduate project will be an investigation into real-time media in combination with live performance to generate improvised computational narratives.
More specifically, I will work with real-time webcams alongside image recognition software to produce text interpretations that will be performed.
My key interest is to question the authenticity of live media and understand how it mediates performance and real-time experience.
The immediacy of real-time makes ‘live’ media seem an authentic depiction of what is happening 'now', it is this idea of authenticity and its relation to performance that I will explore in my work. By mediating acts of performance with real-time software (such as speech-to text, video streaming and image detection) the neutrality of computer software can be explored. I intend to generate improvised narratives through the process of (mis)interpretation of performance and call into question the authenticity of real-time technology.


Performance art has a long history of challenging the relationship between technology and the live aura and the discussion over reproduction and live art documentation has been fought since the 1960s. We now find that Walter Benjamin’s essay Art In The Age Of Technical Reproducibility (1936) needs to be revised, as artists are utilizing real-time technology and wireless networks to generate live performances in immediate and distant locations. When referring to the aura of performance I identify it as the unexpected, the improvised nature of the live moment that cannot be recreated. Computers can now operate within the live moment, processing and responding with the action so that the technology is no longer a reproduction detached from its authentic origin but a player in the act; generating the aura of the live moment in a relational mediation of events.

My wider inquiry for the graduation project is how does technology mediate performance and our experience of liveness?

My interest in real-time led me to webcams and I’ve made some prototypes exploring different methods for performance with video streams. I’ve located webcams from an online community (opentopia) where there is a small group of regular watchers who comment on the webcams like reality T.V. In these examples I perform the viewer’s comments by reading them out loud or creating subtitles text onto the webcam so the metadata becomes embedded into the same image and creates a performance on the act surveillance. I have begun some small prototypes to begin this process –


SURVEILLANCE File:Videocontentanalysisexample.pdf Throughout these experiments I have been trying to establish my angle on surveillance cameras and wanting to bring my practice of performance and improvising technology to the webcam medium. I began researching the wider field of surveillance cameras. The majority of surveillance cameras are not actually being watched by a human. Video content analysis software is programmed to alert if an action is detected that is ‘unusual’. Video content analysis and biometric information will detect humans, gender, weather someone has a bag, and interpret what is going on within the scene. This data analysis interests me because there is a computational process of interpretation going on (similar to speech-to-text) where the computer program is detecting what is happening and translating the live events into data. File:4imagesannotated.pdf I have been looking at how images can be registered by computational processing and the development of computer vision. These are samples of image annotation where the computer automatically labels elements within the frame.
I removed the original image and illustrated this process of computational vision because I am interested in performing this sequence and working with this method of interpretation scenes with computational vision. 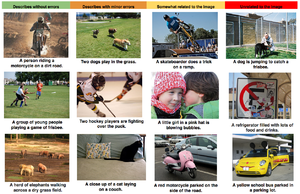 
http://vimeo.com/ 95677127
‘Foley Narrative’ 2014 Throughout my time at the Piet Zwart Institute I have developed a methodology for performing with computational data and a live audience.
In ‘Foley Narrative’ (2014) speech to text software ‘listens’ to the noise I create with objects and translates my actions into words that are projected on screen. The relations between the objects and myself are interpreted by the computer speech to text and program and generate an instant (mis)interpretation. I improvise with the direct mediation between the performance and the computer’s interpretation of my act. I want to continue to improvise with the real-time feedback of computer programs. For me it creates an authentic experience from a tool that is programmed to operate in scripts and not improvise. I want to bring this approach to the webcams, how can I perform the computational mediation of these live events? In ‘Real-real-time’ (2014) I studied Real-time as my media object which opened up many questions in how liveness is mediated and how media depicts live performance. In ‘Real-real-time’(2014) I examine the representation of live in film and computers, deconstructing the illusion of ‘real-time’ and analysing different temporal illusions in media that depict reality. Presenting the illusion of liveness in technology allows us to see the affects of technological mediation of our sense of time. The website uses a live video stream to mirror the viewer into a real time representation.