Difference between revisions of "Jujube/scenes"

- Home is free of judgement.

- Home a collection of small, yet necessary activities.

- Home is a collection of objects.

I decided to rent an apartment for a few days in the Hague, to have a meaningful birthday and pass some time with intention.

I am a guest to an empty home full of another person's things. I am at her home. Is this the home I lost?

Use this opportunity to test: how to compose the everyday with shots?

- Frame objects in a way that shows care and affection. Frame like it is a hug or a gentle touch.

- No face, but hands doing things.

Barend: You mentioned showing small changes in close-up, the establishment of space might not be important

Me: Still gonna shoot a few wide shots. Just to see. Perhaps won't use them.

Barend: Are you going to let the viewer know if these objects are brought into the space? Or make it clear that these are other people's homes?

Me: Not sure. I could shoot some unveiling scenes soon. (but don't see it in the narrative rn.) I see it in the context of the documentary. It's another storyline. It's like a dream... Dream of home.

Me: I am seeing a future shot (done in the studio) of the objects isolated against a minimal backdrop. They exist, but they are not grounded.

+ Make yourself at home.

Shot: grind beans (fill the grinder, action, pour out the grounds into filter)

Shot: wash the dishes. -- take one is too generic - how to construct a more intimate close-up.

Shot: put the dishes back to the shelf.

Shot: get shirt from a hanger.

"Comfortable with the space"

"The coffee scene edit conveys the changing of geography"

"Finding home in oneself -- but not much is shown about the body" -- Response: I have a strong interest in my hands. It is with my hands that I do. Doing seems very important to me, and the repetition that comes with it.

This seems like an opening. Keep making them. ("Yes, these are among my favorite footage.")

Give context to "space in flux". More wide shots. Objects in particular place, then the space shifts. Images of opening the door. Images of packing.

Expand the ritual. E.g. bubbling blue water from above.

No need to force this into the other stories, which by all means keep making.

- use checklist from above to develop the shots

- plug in the charger!

- where did your bikes go?

What does M want?

- To get a haircut

What does J want?

- To be with company

- To confide <-- that's an action, why does she want to confide? <-- To feel okay by talking to another person 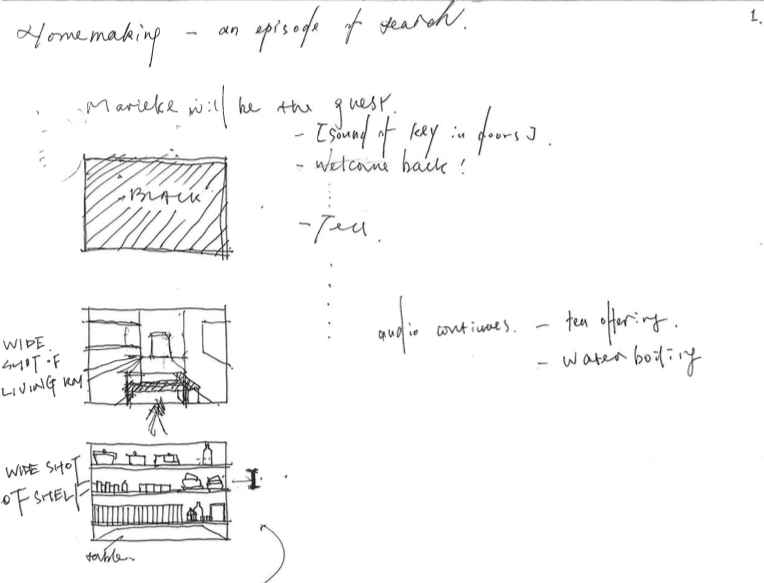 - What is this film about? That will help you will the editing. ("It is a film about two women coming together and showing vulnerability.")

- The shot of the bangs evoke tactility. It changes the motions. The tea shot is a conventional, comfortable social distance.

- Start with the voice track, it is the script. The visuals are performance. Visuals are not necessarily real-time.

- The visuals are music, you can turn them up and down.

- Think carefully: how you reflect the ebbs and flows of small changes (through shots)

- What is your style? Currently there are inconsistency in the shots. The first shot is casual, almost as if you did on a phone, it establishes a distance between me and what I am watching. The shot through the door is voyeuristic.

- My observation is that you want to convey through highly composed shots.

- Think about the meaning of the image and set up your shot.

- Home/belonging is universal. It speaks to a lot of people.

- The haircut closeup has a lot of shadow in the beginning. The composition is so minimal that this becomes distracting.

Cem (in response to David's and Ine's comments)

- We can support the first shot with panning close-ups of the shelf.

- We shoot 4K and Premier can zoom as far as 200%. The first shot is way more zoomed in that seen in the rushes.

- Can probably use a mask for the shadows in the haircut scene? (Ask Barend tmrw)

My own (in response to the tutors)

- I stopped writing the literary prose where nothing happens. In plays actions are reflected in the dialogue. I know the motivation behind the lines. But when it comes to film (in the first year), it becomes telling. How can I make film that is not exposition?

- I did plan the wide shot first in the storyboard then in the shot list. It's been there all along. I recognize the significance. But somehow when it comes to the shot it's not conveying the meaning to you. There is a gap. What is this gap?

- In a sense the wide, establishing shots become b-roll and the close-ups become a-roll. I am not making the kind of conventional documentary (think portraitures from the learning period during Jullie: Jujube/ambacht#reading.2Fseeing). I am not setting up an interview and shooting the actions, objects as b material. The actions and objects ARE what carries the story.

- Sorry to hear about the plants, though keep some dead plants if you still have them... (RIP.) Will be fitting for the shots. Would you mind keeping one of those days free (24/25/26)? I was thinking that we can go to the nursery/garden/park (or equivalent) and then back to the house for potting/trimming/caring for the plants back in the house...We can have tea on the road or back home. Where do you get plants in SF and are there any park/botanical garden/florist-tea-house-combo that you like? I also see this image of you carrying the plants standing next to a giant sequoia.

- Sure! 26th is probably the most free-able. Sadly I’ve already trashed the tree skeletons, couldn’t bare to see them around all the time.

24: catch-up, talk about film and life, etc. check out the living room. notice the stories.

Think about interview questions. What I wonder:

- is home a place that makes you comfortable?

- what is your relationship with plants?

Shot brainstorm: POV of the plant

I want to use the audio from the conversations in London.

From the bones of lemon to Adam and Eve.

I was able to have these conversations because I was in an extremely comfortable place: a nice kitchen/living room (physical space) and with Nuri (psychological space).

- Transcripts first -- this could be a publication -- but I am seeing shots happening in the photo/video studio as in an epic journey (dramatic lighting and all). I am seeing hands performing: showing lemon seeds and peeling apples.

W1 has knowledge of Spanish, ideally a native speaker. (Marta?)

W1: to juice a lemon W2: to finish a thought (finishes with horror)

CLOSE-UP OF HANDS. WOMAN 1 CUTS LEMON ON A CUTTING BOARD. WOMAN 2 DRINKS COFFEE FROM A CUP.

W1: I don't know why in Spanish these are not called seeds... they are called bones.

W2: The bone of lemon. (beat) Pablo Neruda was obsessed with it.

W2: Which yellow bird fills its nest with lemon? (beat) He's obsessed with the color yellow.

CUT-TO. EXTREME CLOSE-UP. SEEDS OF LEMON IN THE FLESH.

CUT-TO. CLOSE-UP. WOMAN 1 SQUEEZES THE HALF LEMON ON THE JUICER.

CUT-TO. CLOSE-UP. WOMAN 1 POURS THE JUICE INTO A GLASS.

CUT-TO. EXTREME CLOSE-UP. A SEED LEFT IN THE JUICER.

W2: Whoever called it the bone saw the human in the lemon.

CUT-TO. EXTREME CLOSE-UP. SEEDS ON AGAINST THE FLESH OF THE PALM. SOUND OF WATER POURING INTO GLASS.

CUT-TO. CLOSE-UP. THE USED HALF LEMON.

- Are there a lot of apples trees, um, in Hooke, where Luis is?

- It's quite nice actually... No, I haven't seen plantations of apple trees

- What's this other one... Chestnut, yeah. A lot of berry, blackberries, wild berries,..., lemon, elderflower, just a lot of wild things combined

- Uhmmm. English gardens are so beautiful, I realize, it's like very curated but also kind of wild, it's not the French trimmed super human work garden. It's really nice

- Yeah. I guess in Kew Gardens it will still be kind of planned

- Cause it's more greenhouse... And it's also royal

- (laughs) Why is everything royal so — maybe the term royal just means it's needs to be manicured... by other humans. It's kind of a metaphor for hu — for class. You have the humans who take care of the trees, like the gardener, is such a staple figure in, like, the royal

- But the funny thing is, the history of fanciness, or royalness... is so weird... Too many things, to many ornaments

- Yeah I guess the period of Baroque... The Romantic Period

- The Romantic Period never ended... no?

- Yeah. I wonder when the Buckingham Palace was constructed. That will say a lot

- Yeah, well... I am too — non-conformist tourist... We should just read the wikipedia don't

- Oh wait today's... Sunday at the Buckingham I think is the changing of guards

- Not exactly, but no so far

- Yeah that could be a plan. Finally my third time in London maybe I should see something (laughs)

- Yeah, you would say los huesos

- He's obsessed with the color yellow...

- Bone marrow of the lemon

- Cause yeah maybe... whoever came up with that term probably was thinking the human in the lemon. That's actually quite...nice

- Well apples. It's actually a fertility symbol. If you cut it

- Yes. I mean apple is like a loaded fruit with all its biblical meanings

- Or awakening of sexual

- The part about god and adam and eve... is that in the new testament? I actually don't know. Cause I don't know, is apple a common thing in the Middle East? I feel it's more common in the slightly northern places

- Yeah you are right. Actually... I don't know. My knowledge of the bible is less —

- Mine is also. I've only recently got — or I think, I started reading many things at the same time, so sometimes if a theological or biblical reference came up, I also — I'm more interested than I used to, but I still don't know much

- We can reuse this

- then apple, adam and eve, which chapter

- well at one time fertility and lust were probably linked very tightly, but then they came up with like contraception that's like a modern... yeah

- okay so I guess we decided that... cause it's the ten and it's started. I feel kind of guilty but it's okay

- I normally don't peel the apple, but I think it's nice to just have the apple. It tastes nice...no?

- have you ever tried to eat a peeled plum... Or like take away the skin?

- mmm maybe if it's a super ripe one

- it's so interesting it's like a flavor you don't normally disassociate from the peel, it feels a bit bitter

- the peel has like all the tartness, the other, the flesh is actually just super sweet

- they are very sweet these ones

- so yeah the center hhhh sweetness and the peel is like everything else. So you can very easily tell, yeah, dramatic

the migration of mother tongue

A conversation carried out in two languages.

Follow the protagonist to places where she takes photography with a 35mm.

What does she want to remember?

Things of beauty and intrigue:

- what are the moments you associate beauty with?

She goes to the darkroom.

When the images emerge:

She goes to a vast space.

It's just the camera and her now.

Shots of her taking off the camera.

Shots of her opening the camera.

Shoot with the heaviest equipment.

The CF card cannot be recognized in the camera.