< back to my page

Currently (and forever) this is a rough overview on the variety on thematics I am interested in and more/less working on.

Thoughts on The total information surround

Parallel to the Democratic Surround created by American sociologists and artists during WWII and described in Fred Turner’s “The democratic surround”, a medial surround is communicating reality until today. Today’s medial surround is highly shaped by digital/ Internet technologies whose roots were established in early cybernetics, further developed through the 1960’s American counter cultures ambitions and lately enforced through the immense commercialisation in the years of 2000s and 2010s. This media surround can be described as an Apparatus (after Flusser).

The term describes a way through which the minds of Americans should be prepared to be willing to face (and go to) the war for the United States and fight against German nationalism. At the same time the use of (mass) media for propaganda by the Germans was feared, as it made the citizens follow their “Führer” dumbly, without questioning and created an unreflected, narrow minded crowd of people. In America, a way to teach people to make up their own (democratic) minds through reading images was intended to be developed to achieve a democratic mindset as well as the people’s own wish to fight against the autocratic system of Nazi Germany (and in consequence every other non-Democratic system).

For that being possible individual spectators should choose what to look at from a surround of multiple images. As proposed in Herbert Bayer’s Diagram of 360° field of vision and realised in the Road to victory Exhibition 1942 at MoMA New York.

Similarly, in today’s media we surround ourselves with images. This is technically optimised in Internet formats like social media platforms that display images or other pieces of content becoming fragments of the world and how it is perceived. It is acknowledged that with the rise of these platforms a majority of people’s perception is mediated through immersion with this internet surround. But still, all kinds of “traditional” media act the same way for a longer time and still co-exist to the Internet technologies. Furthermore, many of the “traditional” media are becoming more and more part of the Internet surround, because of either a technological link between both or the echo of the new media on the traditional one.

Although the Internet surround, or even more the total surround I propose, has aspects of a perfected, idealised, because completed Democratic surround in it, it seems as this kind of surround cannot at all be Democratic. The internet surround and consequently the total surround are an apparatus that’s technology is in power over the people, that play with the apparatuses programme. The prgrammes are the four following: 1) Active Democratic Programme, 2) Attention Programme, 3) Reach Programme, 4) Authoritarian Programme. Where the first and contrasts the other three.

The active democratic programme, describes the assumption and limited fact, that the Internet is a medium in which everyone can take part, i.e. distribute information, communicate, have access to information. The rise of content-creation consumer-products, such as cameras, video cameras, accessible and powerful computers, prove this. The creation of personal content is even more and more professionalised. The first important issue is in this programme’s definition already: It pretends to be, but is proven to be widely false by the other programmes.

The reach programme describes the market behind the underlying commercial system. Reach is divided in qualitative reach and quantitative reach. Both of them are related to money. The qualitative is linked to the technical advantages a distribution channel has access to. It is what commonly is described as targeting. The idea behind this is that a universal surround is disrupted and indeed individualised surrounds aiming to provide an individual with information specially “designed” to attract the individual. So, to improve the attention programme by channeling reach. The quantitative is more directly linked to money, as the distribution of information is a business model, money exchanges in the amount of reached individuals.

The authoritarian programme describes several factors that are not (without force, that can be money, also) to overcome when the information surround is artificially narrowed/limited. This can be access: Contrary to the active democratic programme, in fact access to information is exclusive, i.e. needs to be payed, needs to be under a contract etc. This can also be political regulations, or even political censorship.

What are you photographing? (Steve's question)

The loose categories of imagery that I am creating are:

1) Portraits of the designed society

By re-photographing the people from the photographs visible on ad posters or retail prints that are visible in the public space, I am isolating portraits of contemporary fashion (i.e. fashion but also vogue and trend). The photographs are made on site, as seen, which results in an abstraction becoming visible caused by the sunlight or artificial lightning: The materiality of the print becomes visible but also its reflective characteristics create another layer, as does the reflection of the surrounding space in protective glasses in front of the print. Furthermore the print itself is abstracted by the close field-of-view that is making the printing-technique visible.

A sub category of the above mentioned portraits make the portraits of people in architecture renderings („Render ghosts“, after James Bridle), that are photographed the same way. An abstraction though is rather created by the digital artifacts of the renderings and the layer of the printing technique than by reflections of glass, since the renderings are less often found behind glass in the public space.

2) Spaces for the people

The architectural public spaces photographed have artifacts created for humans in it that are „designed“ to have a specific use to them or, very broad spoken, want to create an aesthetical sojourn quality in it. Beyond spatial and architectural motifs, specific objects in the space, that are designed to add a feeling of naturalness to the constructed space, become subject of the photographs. By isolating these objects in the photographs, the opposite impact is created, they become signs of artificiality. The scenes are mostly photographed empty, without humans in it. The depicted objects though are clearly human-made and made for humans and therefore index to the existence of humans in the empty scenes.

The photographs are fragments that describe how a perception of reality is produced in the public. I understand the photographed as hyperreal simulations that again become reality through their existence or through humans’ reactions on the hyperreal’s impacts. They provoke feelings and desires, that reoccur in the medial perception of the society and therefore become real. Currently the motifs consist of the materialised public spaces in which the humans are only passively visible and on the other hand the immaterial (since they are taken from an image) portraits of humans.

Whereas the motifs of the spaces are incarnated hyperrealities, the portraits show rather the hyperreal as an image that later through the people looking at the actual photograph (the real one, not the one I took), become hyperreal. 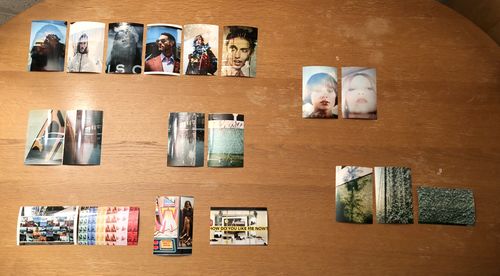 Regarding appropriation of images

Interesting as a technology to reproduce 3-dimensional photographs (see below). But also, it can be discussed if a lightfield compared to the single lightray a traditional camera (film or cmos/ccd/bayer/x-trans/etc sensor) is capturing more accurate physical traces of the reality, because it is capturing a more complete set of information of the scene.

A lightfield requires further new viewing techniques. The way Lytro did it, to bring the lightfield image on a 2D screen and cahange it through mouse/keyboard control failed. When printing from an lightflied image the traditional way, a "boring" 2D photograph remains. So special printing applications or lightfield screens or maybe the use of different input methods to mouse and keyboard for the reproduction on a 2D screen/VR glass (altough VR glasses are not a convenient way to consume images) could be used for that.

I just got the JeVois Camera and want to try it out over christmas.

Is interesting as a technique to create 3-dimensional photographs and it is becoming embedded into the most used cameras and image viewers (i.e. smartphones and social media) and its viewing technique becomes more natural (see facebook newsfeed GIF). So it is likeley that these kinds of 3D-photographs will appear increasingly. This will result in a habituation of the three dimensionality of photography and therefore will be used even more.

The question arises what this will do with traditional photography, if it does anything at all and does not stay a social media/smartphone phenomena.

I tried it with the Samsung Gear 360VR from the school's rental and was disappointed. I am not sure about my personal use of this technology, but want to further think about it. What comes with it is definitely the way to frame an image changes since the creator is not technically in control of where the user will look. But still artistically there are ways to lead the viewers viewpoint.