" The innovative part of this project doesn’t concern the technologies used but the new user experience modality enabled by technology in order to access and manage the contents. The proposed interaction model is based on the post- Wimp paradigm. The exhibition space is pro-active and affords user’s senso-motorial patterns in order to enhanced the experience of the user during the visit through the “magic wand”. Being a completely transparent tool it allows visitors to increase their experience visiting the exhibition. The magic wand acts as a mediator enabling the user to stay focused on the exhibition instead of the tool of interaction." (abstract)

"The principles of direct manipulation (Shneiderman, 1983) are fundamental concepts within the HCI (Human Computer Interaction) leading the development of graphical user interfaces towards Wimp (acronym that stands for Windows, icons, menus and pointing device)."

"The Wimp GUI (Graphic User Interface) improves the human computer interaction allowing a simple and easy access to the applications and consequently it allows an increasing amount of users."

"The Wimp GUI, even if supporting the user on his activity better then the command-line environment, doesn’t fill the semantic gap on the side of execution between the intention and the execution of the action (Norman, 1990)."

"The Wimp model is based on the fact that computers have only keyboard and mouse as input devices that are limited in comparison with the users set of actions. In this perspective Wimp interfaces don’t solve the gap between the users actions and set of commands. Even if the Wimp model is a step forward in respect of the command-line interface, a semantic distance between formulation of intention and action execution still remains."

What is the WIMP interaction model

"According to Beaudouin-Lafon the Wimp interaction model (Beaudouin-Lafon, 2000) can be defined as: application object displayed in document windows, object can be selected and sometimes dragged and dropped between different windows, commands are invoked through menus or toolbars, often bringing up a dialog box that must be filled in before the command’s effect on the object is visible."

"The post-wimp interaction model has the purpose to reduce this gap allowing an interaction between the user and the manipulated object."

"In this paper we consider the post-Wimp model as a distributed intelligent environment in which the user interacts with objects in the real world to actuate procedures or execute applications. With distributed technology in the real world it is possible to embed microprocessors in the object; an everyday no-technical artefact could be transformed into a powerful tool."

"In our perspective the post-Wimp paradigm, artefacts afford innovative senso-motorial patterns that enrich the meaning of the user interaction creating an experiential relationship with the environment. The proactive environment can recognise the user profile adapting information and services provided according with the user preferences, attitudes and needs. Each component of the architecture has to be aware of the context connected with the other elements and integrated in the community. This post-Wimp model aims to re-introduce a semantic dignity in human computer interaction. This paper introduce a post-Wimp implementation of an application based on ambient intelligence. The main objective of this project is to substitute a traditional input tool and user action connected to it, with common objects and everyday gestures that could give a deeper meaning to the action performed by the user."

"Memex consists of a desk, and while it can presumably be operated from a distance, it is primarily the piece of furniture from where a user works. On the top are slanting translucent screens, on which material can be projected for convenient reading. The Memex vision strongly inspired the concepts of Desktop, Hyperlink and the research activity of the Xerox PARC Lab and the Ted Nelson project Xanadu." 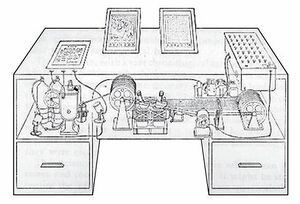 Memex is the name of the hypothetical electromechanical device that Vannevar Bush described in his 1945 article "As We May Think".

"Currently, the most common examples of post-Wimp interaction commercially available today are pen-based handwriting recognition (such as Graffiti and Jot) used in hand-held PDAs and TabletPCs (such as Penabled). In these cases the user interacts with the Wimp interface through a non Wimp object (touch screen technology and the pen)"

"In this kind of interfaces physical objects are used as input devices to manipulate virtual objects. This increases the user experience since interaction occurs in the real world. An example of Graspable interfaces is the Arcade games. The user interacts with the virtual reality through objects such as joysticks, pads, steering wheel and gear consoles. For example, in the golf arcade games the player swings a real club and hits a real ball. The ball trajectory is then simulated and displayed on the screen."

The interaction between a kiosk and a magic wand is hidden for the user. When the user interacts with the kiosk placing the magic wand near the reader, the currently visualised content on the screen are automatically captured using the magic wand. The Database on the Server is updated with the information of which wand has been used in which room as well as what information the user captured. The complexity of this technology is completely hidden to the user who can easily play with the magic wand and enjoy the possibility to carry home the most interesting contents and images.