From Media Design: Networked & Lens-Based wiki
Revision as of 16:31, 21 November 2018 by Cem (talk | contribs) (Created page with "frameless What are we looking at? Is it a projection? It looks like two or three videos blended together. Layering through Adobe Premiere...")
(diff) ← Older revision | Latest revision (diff) | Newer revision → (diff)
Jump to navigation Jump to search 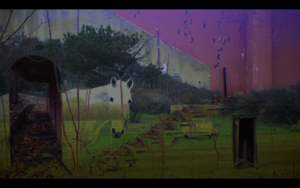 What are we looking at? Is it a projection? It looks like two or three videos blended together. Layering through Adobe Premiere with techniques like addition. A two dimensional visual projected on a three dimensional surface. Pretty sure it's projected. There is a relation with two spaces, interior space and exterior space. Abandoned insides, of a house or a building. Words written on the box probably Turkish: «belediyesi« Atmosphere is really dense and heavy, no transparent colors, makes you feel like one couldn't breathe here. Looks like there are doors. There is the pink in contrast with the environment's general darkness. There might be more than two images, maybe three. Horse seems apart (as a different layer) from the trees. Through the horse you can see another space, there is no interaction with the horse, it looks emotionless, it looks alienated. Horse is looking at us and it feels like we don't know what he wants from us. It feels like he going to walk out of here. Also it feels like horse is dripping but looks more like those are the branches on the stairs. At first the stairs seem as glitches. It looks like a dream. It looks very artifical, I don't see it as a living thing. I can see the horse moving, that is the only part that's alive in this image. On the left there is this space, like a tunnel or like a train. The archway on the left leads somewhere but the stairs don't. It is as if we are in a dream, and horse is asking us where we want to go. It's like a fairy tale. You got two doors and you have to choose one. You can't question what is happening as if you are in a dream. It's both like day and night at the same time. I'm confused if I'm inside or outside, if it is sunset or daylight. It seems like there are two seasons at the same time: Autumn and a late summer. Maybe it's about letting go. It is like narcotics, you need someone to guide you through this. You can read it from bottom to top or vice versa. We cannot associate the sky with freedom, as we normally would. Since it's a strip from a video, what happens next? Does the horse move? Maybe the camera will move to new scene, maybe we are going to have a cut. This is kind of like a memory, one thing dissolves into another. It's a snapshot of a movement, there can be a family figure coming after this.