The smart sign feels anonymous and faceless in a sense that it doesn't show - it's emptiness being a free space for anything whatever. It holds the promise of endless potential and it restrains itself from any kind of particularity. Its blank white face gazing.
Beggar for advertisers.
Are you willing to put your name up in light?
I can be flashy.

Its bright white holds the false promise of light, when in fact there is nothing there but erased matter. The flat plane filled with coded paint – the whitest.
F F F F F F sucks in everything that once might be there and spits out every shapeless physicality to come into imaginative nothingness. The ambiguity of the thing advertising for itself as a carrier for advertising in its current capacity as a blank formula strikes me.

Through the little wholes it has for screws to fit in, it seems to whisper about its practicalities. It makes almost no physical contact with the pebble covered floor that is only there as a secondary décor to the object that displays its non-message. It is precisely pointlessness that it seems to be telling me about.

The void, so generous.
Do you want to cash in?
The call seems inescapable. 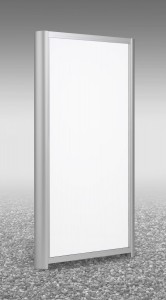 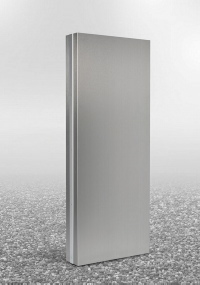